Guy used an entire dorm building to propose to girlfriend

When some people are in love, they want to shout it from the rooftops. Frank Tierney, a residence hall director at the University at Buffalo, decided to write it on a dorm.

He used 10 floors of a dorm to ask his girlfriend to marry him on Dec. 30, 2013. (Don't worry, she said yes.) A Redditor posted a photo last week, then identified Tierney as the romantic behind it all.

Getting all the lights in place was quite a process, but it certainly paid off. Tierney and his friends even had to talk to campus police to ensure that buses were rerouted. Tierney also said he originally had no plans for this to be recorded, but realized it was probably something he'd want to look back on.

I originally asked everyone to stay hidden because I wanted it to be just us... but I wanted those moments captured for us and to show our family. For obvious reasons everyone was way too invested and happy... there was no way they weren't going to come over and celebrate such a moment. And, in the end, we are truly grateful it turned out the way it did. :) 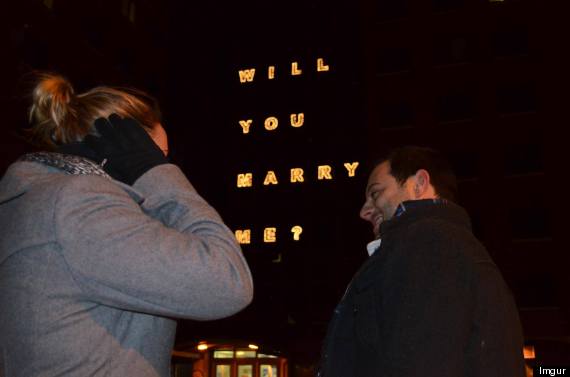