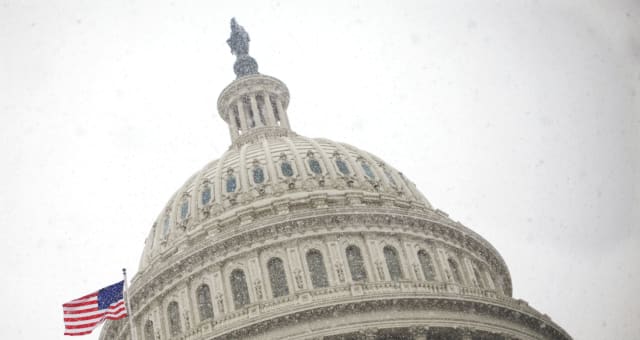 WASHINGTON (AP) - A comprehensive defense policy bill that aims to deal with the epidemic of sexual assault in the military is heading to the Senate, where it could get slowed by Republican outrage over majority Democrats' limits on GOP power.

The House overwhelmingly passed the legislation, 350-69, on Thursday night, the last roll call vote before the House adjourned for the year. The strong bipartisan vote puts pressure on the Senate to back the legislation without changes even though Senate Republicans are furious with their inability to offer any amendments to the massive bill.

Reflecting the drawdown in Afghanistan and reduced defense spending, the bill would authorize $552.1 billion for the regular budget, plus $80.7 billion for conflicts overseas in the fiscal year that began Oct. 1. It represented a compromise worked out by the top Republicans and Democrats on the House and Senate Armed Services committees after a similar bill stalled in the Senate just before Thanksgiving.

The bill would provide a 1 percent salary increase for military personnel, keep construction going on bases and an aircraft carrier in Virginia, pay for the destruction of chemical weapons in Syria and cover combat pay for war-fighters. The question is whether Senate Republicans would scuttle the popular bill days before Christmas at a potential political cost to incumbents facing primary challengers.

"To not pass this is to jeopardize our national security and not support our troops," said Rep. Adam Smith of Washington state, the top Democrat on the House Armed Services Committee.

House Speaker John Boehner, R-Ohio, said in a statement that the bill "provides our troops with the tools, resources and authorities they need to keep America safe."

Congress has passed the National Defense Authorization Act every year since the Kennedy administration. Senate Republicans, including Minority Leader Mitch McConnell, R-Ky., are angry over tactics by Senate Majority Leader Harry Reid, D-Nev., accusing him of tyranny for changing the rules last month to reduce their power over nominations and denying them the opportunity to offer amendments on the defense bill.

The bitterness was evident in Sen. Rand Paul's words on the Senate floor.

Senate Republicans could block the defense bill, challenging the notion of rushing through a massive bill without any amendments and force Reid to secure 60 votes to move ahead.

Senior military leaders, including Army Gen. Martin Dempsey, chairman of the Joint Chiefs of Staff, have written to congressional leaders, pleading with them to approve the bill.

The legislation includes nearly two dozen provisions addressing the epidemic of sexual assault in the military. The Pentagon has estimated that 26,000 members of the military may have been sexually assaulted last year, though thousands were afraid to come forward for fear of inaction or retribution.

The bill would strip military commanders of their ability to overturn jury convictions, require a civilian review if a commander declines to prosecute a case and require that any individual convicted of sexual assault face a dishonorable discharge or dismissal. The bill also would provide victims with legal counsel, eliminate the statute of limitations for courts-martial in rape and sexual assault cases and criminalize retaliation against victims who report a sexual assault.

The compromise adds another provision with strong bipartisan support that would change the military's Article 32 proceedings to limit intrusive questioning of victims, making it more similar to a grand jury.

Outraged by several high-profile cases, Republicans and Democrats in the House and Senate united behind efforts to stop sexual assaults. Reps. Mike Turner, R-Ohio, and Niki Tsongas, D-Mass., seized the lead in the House, while the record number of women on the Senate Armed Services Committee - seven of the panel's 26 senators - shepherded changes in the Senate.

Tsongas said the latest changes were only one step, as each year Congress discovers another shortcoming in the rules.

"There is no single bullet," she said in an interview. "This is multifaceted in its challenge and is going to require many, many efforts to deal with those facets."

The legislation does not include a contentious proposal from Sen. Kirsten Gillibrand, D-N.Y., to give victims of rape and sexual assault in the military an independent route outside the chain of command for prosecuting attackers, taking the authority away from commanders.

Among other provisions, the bill would bar transfers of terror suspects at the U.S. detention center at Guantanamo Bay, Cuba, to the facilities in the U.S., an extension of current law. But it would give the Obama administration a bit more flexibility in sending suspects to foreign countries.