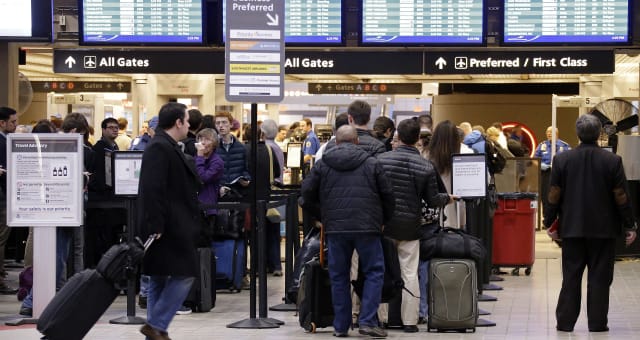 NEW YORK (AP) - Thanksgiving travelers scrambled to book earlier flights Tuesday to avoid a sprawling storm bearing down on the East Coast with a messy mix of snow, rain and wind that threatened to snarl one of the busiest travel days of the year and ground giant balloon versions of Snoopy and SpongeBob SquarePants in the Macy's parade.

The characters that soar between Manhattan skyscrapers every year may not lift off Thursday if sustained winds exceed 23 mph and gusts exceed 34 mph, according to city rules enacted after fierce winds in 1997 caused a Cat in the Hat balloon to topple a light pole and seriously injure a spectator.

Current forecasts call for sustained winds of 20 mph and gusts of 36 mph.

"At this time, it is too early to make any determinations on the flight of the giant balloons," said Macy's spokesman Orlando Veras. "On Thanksgiving morning, Macy's works closely with the NYPD, who, based on real time weather data and the official regulations determine if the balloons will fly and at what heights."

Balloons have been grounded only once in the parade's 87-year history, when bad weather kept them from flying in 1971. They're set to be inflated in Manhattan on Wednesday evening.

Meanwhile, meteorologists warned that the storm, which has moved across the country, would almost certainly upset holiday travel plans on Wednesday for those hoping to visit loved ones in the mid-Atlantic and Northeast. Many travelers were moving to earlier flights, taking advantage of airlines' policies to waive their normal change fees.

Lisa Jablon was originally supposed to fly Delta from New York City to Syracuse, N.Y., on Wednesday at 9:39 a.m. But after following the storm's movements, she decided to jump on the last flight out Tuesday night.

"I'm flying up to spend the holiday with my boyfriend's family and I didn't want to get stuck," Jablon said. "The rain seems to be better off tonight than it looks tomorrow morning."

The good news is that the storm is supposed to pass through the Northeast before Thanksgiving Day, with the weather mostly clearing up by Wednesday evening.

Most airlines are hoping the storms won't be too severe, allowing them to continue operating a nearly full schedule with few cancellations, but likely a lot of delays, said Daniel Baker, CEO of FlightAware, a global flight tracking service.

"Cancellations are used as a good, preventative measure to avoid cascading delays that can negatively impact travelers thousands of miles away," Baker said.

Heavy rain and high winds would affect travel by air and road in the Northeast and mid-Atlantic and could have a ripple effect on airports with departing and originating flights elsewhere.

Heavy rain and breezy conditions were in the forecast Wednesday from the Carolinas to the Northeast, with ice and snow a possibility in the Appalachians, western Pennsylvania and western New York.

The storm system, already blamed for at least 11 deaths, could also spawn isolated tornadoes in the Florida Panhandle. The Southeast is set to suffer soaking rain in the coming days, primarily in Alabama, Tennessee and Kentucky.

"It couldn't have come at a worse time," said meteorologist Tim Morrin of the National Weather Service. "Visibility will be restricted not only by the rain and wash from other cars, but from the fog."

After arguing with American Airlines on Tuesday, David Short was able to board a flight from New York City to Dallas a day earlier than planned. The airline initially told him it would cost $2,000 to get on the earlier flight, but a few hours later a representative told him the airline was offering flight-change waivers at no cost.

"It was definitely very frustrating and stressful, but it's all working out," Short said.

This holiday will likely see the most air travelers since 2007, according to Airlines for America, the industry's trade and lobbying group, with the busiest day being Sunday, an estimated 2.56 million passengers. Wednesday is expected to be the second-busiest, with 2.42 million passengers.