The cost of turkey and trimmings? 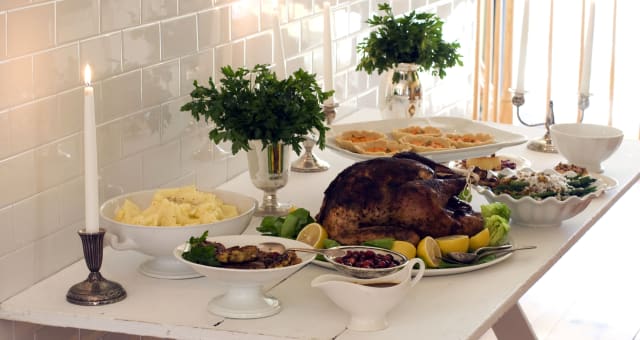 Here's another reason to be thankful this holiday season - the cost of putting Thanksgiving dinner on the table is down slightly from last year.

But don't bank on those savings for any big Black Friday splurges. The average Turkey Day dinner will cost $49.04, or just 44 cents less this year than it did in 2012. And while every penny counts, if you need to do any traveling to belly up to the big meal, increases in airline and train tickets mean that 44 cents won't get you very far.

The good news is that after some steep price hikes during the economic downturn about five years ago, food prices have remained mostly stable this year. It's a welcome change from 2011, when the cost of Thanksgiving dinner jumped $5.73, up from $43.47 in 2010, according to the annual informal survey of consumer grocery prices performed by the American Farm Bureau Federation.

The group estimates the cost by averaging non-sale food prices around the country based on feeding 10 people a meal of turkey, bread stuffing, sweet potatoes, rolls with butter, peas, cranberries, carrots and celery, pumpkin pie with whipped cream, and coffee and milk. And yes, their estimates account for the need for those all-important leftovers.

The credit for this year's slight drop in price goes to stable commodity and fuel prices, both strong drivers of the prices consumers pay at the store, says Ricky Volpe, a research economist with the USDA's Economic Research Service. He says overall grocery prices are down about one-tenth of a percent since January.

One exception - poultry. Though the Farm Bureau didn't detect a price increase in turkey since last year (they actually found the price for a 16-pound bird down 47 cents), Volpe says consumers shouldn't be surprised if that component of the meal jumps as much as 5 percent over last year. Higher demand and feed prices are to blame.

However, you might save a bit of cash on gas when you head to the grocer to get your turkey. At the moment, drivers are paying about 25 cents less per gallon than they were a year ago, with a national average of $3.19, according to travel tracker AAA. And while the group hasn't issued a prediction for gas prices the week of Thanksgiving, they say that in recent years prices generally have dropped in the weeks leading up to the holiday.

Need another reason to drive? The average domestic airfare is up 9.5 percent from last Thanksgiving to $313, according to the Airlines Reporting Corp., which tracks tickets sold by online and by traditional travel agencies. Meanwhile, Amtrak prices in September (the most recent month for which data were available) were up more than 4 percent over a year ago.

Consumers won't be able to do much about the cost of travel, but there's always plenty of ways to spend less - and a lot more - on food.

The Farm Bureau estimate budgets $2.18 for a dozen brown-and-serve dinner rolls. But if you're willing break out a recipe and bake your own, a home cook could cut almost a dollar off that price. On the flip side, if you'd prefer to leave the cooking to others and purchase a ready-to-eat meal from a grocer, expect to pay a premium for the convenience, maybe $75 or more.

Likewise, if your tastes lean to the organic or heirloom end of the food spectrum, you won't find turkey for $1.36 a pound as the Farm Bureau did. Budgeting two or three times that is a safer bet.

And since it's impossible to escape holiday creep, we might as well break the bad news about your Christmas roast. Beef prices are at or near record highs this year, so you can expect to pay as much as 2.5 percent more than last year for that succulent rib roast you've been waiting all year for.
Click here for more news on AOL.com