The Art (and Craft) of Skiing: Utah's RAMP Sports 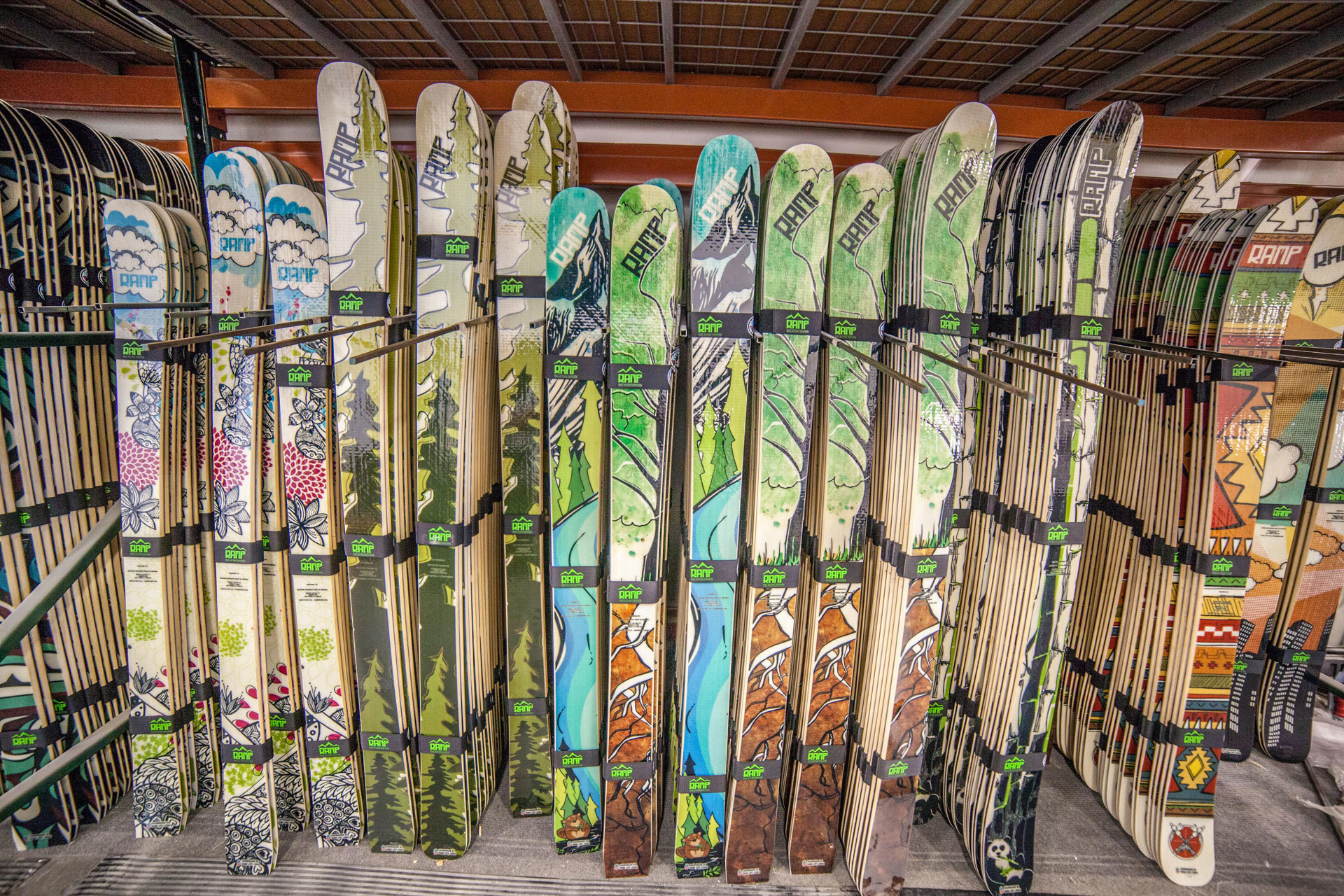 Many things made in America have been defined by their geographies. Shoes made near leather tanneries. Flour mills near wheat fields. Bricks baked near clay mines.

But Utah, despite its mountain ranges boasting dozens of ski resorts, has never been a major ski manufacturing hub. The most recognized U.S. ski brand, K2, started on Vashon Island in Washington, but its skis are now made overseas. Today, even though there are a few custom ski makers in Utah and other states, most skis and snowboards are manufactured in China, Taiwan and countries in Eastern Europe.

And if it hadn't been for the need to compete against the big guys in a different way, RAMP Sports founder Mike Kilchenstein may have stuck with making his skis in Taiwan.

But two years into building the new company with his wife Edie, Kilchenstein realized he either needed to change his business model or get out of business.

"We were getting a name as a craft brand, but that alone wasn't going to be enough," Kilchenstein says. To compete against brands, which were more popular and had more clout with ski retailers, Kilchenstein needed to think differently. "We were designing [the skis] here, but we were making them in Taiwan. I thought if we had the factory here, the conversation changes."

But in Park City, Utah, home to RAMP and the U.S. National Ski and Snowboard Team, that's not the case. From RAMP's front door, the broad high mountain meadows that fill with hundreds of inches of snow every winter stretch across the horizon.

So armed with a crazy idea of making reasonably priced skis in America in a completely different way than any one in the industry, Kilchenstein bought a building that once housed a motorcycle dealership and started making skis in Utah in 2012.

Chapter One: Building a Factory

Skis may look simple from the outside. But inside those few centimeters of thickness lies an engineering masterpiece. You start with a core of wood-bamboo in the case of RAMP's skis-and then add layers of Kevlar and carbon fiber to create a tough, but flexible base on which to ski.

Until the mid-1990s, skis were long, skinny and pretty straight. But engineers at companies such as Elan had been working for almost a decade on skis for competitive riders that completely broke that mold.

These skis were wider at the "shovel," the top end of the ski, narrow at the waist (where the boot and bindings are) and then gradually getting bigger toward the ski's tail.

It wasn't until 1996 that these "parabolic" skis went mainstream. A then-up and coming skier named Bode Miller competed in the Junior National Championships on K2 skis that had sharply nipped-in waists. He won two firsts and a second in the competition. Miller went on to win the most gold medals of any U.S. male skier-all the while skiing on the once oddly shaped skis.

The sinuous shape redefined an industry. Ski factories around the world spent millions of dollars ripping out machines for straight skinnies and replacing them with stamping presses for skis that were also known as "fatties."

By the time the Kilchensteins dreamed of starting RAMP following Mike's retirement after 32 years from French ski maker Rossignol, everyone was making skis with varying waist sizes designed for ski conditions ranging from deep powder to steep slaloms.

For two years, RAMP designed its skis in Utah and then sent those to Taiwan to be made. But that meant its skis were defined by the molds those factories had invested in. "You are limited to what they can do, you don't control your own destiny," Kilchenstein says.

Competing with skis that pretty much looked-at least in shape-like everyone else's skis wasn't working for RAMP.

"The key to manufacturing was going to be quick-moving and agile," he says. "Ski shapes were changing, but the problem is that the factories had invested so much in tooling that the mold needed to get used a lot."

So the question was: could RAMP build a U.S.-based factory where it could change molds quickly, use far fewer people than in overseas factories to keep costs down, and make viable skis that people would want to buy?

For engineer and RAMP's product manager Christian Alary, the answer was in the vacuum molding process he already used to make prototype skis. The real issue was whether he could make enough of them to keep the skis at around the $700 price point.

They kept the investment in machinery low, but made sure the raw materials for the skis were top grade. They now make hundreds of skis, but with just a handful of people.

"What we saw was that we were making an investment in the skis, not the manufacturing," Alary says. Basically, "we mold without dedicated molds because we have to be flexible."

In the end, the factory is a tightly controlled dance. The raw materials-bamboo and resins-come in the back door. The wood is cut with a CNC machine to fit flexible molds that Alary is always playing with to determine the best ratio of shovel to waist to tail dimensions.

From there, the skis are loaded on what look a lot like stripped down hospital gurneys to a big sunlight-filled shop where Doug Webster and his team lay down thin layers of epoxy onto the wood. The skis are then sealed in gray vacuum bags and slid into industrial ovens for 26 minutes. The warm skis, smelling of pine resin and baked wood, are popped out of the molds and moved into the honing room where the edges are smoothed and sharpened.

During each step along the way, people who ski and snowboard every winter lay their hands on RAMP products. That means the factory can't make hundreds of thousands of skis, but it can make just over two thousand in a year.

"Taiwan makes one third of the snowboards in the world," Alary explains as an example. "One year of production for us is one week for them."