Walmart wants people to know that it has what they want even when they're not close to one of the stores. So if you need a garden shovel, go online and order it. Baby diapers? Head online. Halloween costumes? Online, baby. Even if you're a "fat girl."

That's right, as the blog Jezebel reported, and recorded through a screen capture, Walmart literally had a section of website's Halloween costumes section called "Fat Girl Costumes". The section had many of the selections available on the "Women's Plus Sized Adult" section, leaving Jezebel to speculate that some web developer created a "'hilarious' joke" and forget to take it down so it went live.

As of 11:15 this morning, the fat girl section still existed, only with zero products available.

But wait, it gets better. Eventually someone did change the name of the section to "Women's Plus Size Halloween Costumes" by this afternoon, as AOL Jobs learned by checking the current status. But an addition to the page undercut the entire insult rollback, as this screenshot shows. 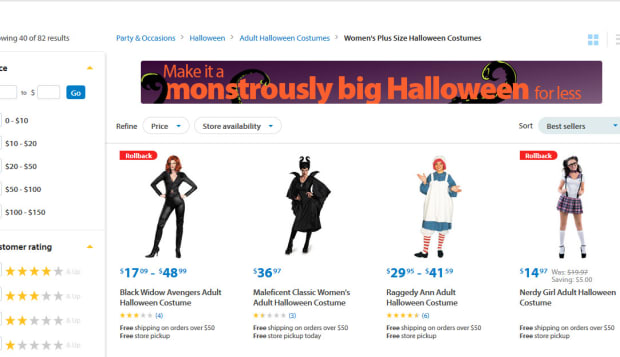 Yes, at the very top of the plus size costumes section is a banner reading, "Make it a monstrously big Halloween for less". Oh, much better. And, of course, having something like the Feelin' Groovy Adult Plus Halloween Costume that is supposed to fit everyone from a size 16W to a 20W is the height of customization.

As Jezebel pointed out, this section wasn't the only offering that might give pause to many shoppers.

Walmart, God bless them, has something to offend just about everyone: if being called fat isn't quite your speed, why not peruse one of these racist American Indian parody outfits? Or this entire selection of "Gypsy" costumes? Or, returning to fatness, this super witty and sophisticated Fat Tinkerbell get-up for men? The description reads "Tinkerbell really let herself go since she has been out of work for so many years!" Get it? Get it? Sigh.

And then there is the truly odd description of a Marie Antoinette Ghost costume:

And, yes, that was taken verbatim from the site, including all the peculiar characters that should have been apostrophes.
Tags
Read Full Story