Pulling Out the Stops at Hartford's Austin Organs 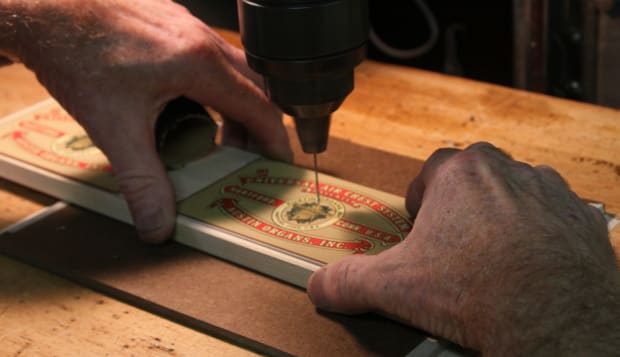 It's easy to miss Austin Organs. The sign is small, the driveway partially hidden behind a clump of trees. Residents of Hartford, Connecticut may have passed it a dozen times without registering much beyond a brick building and a row of dusty, clouded-over windows. But behind those windows, within shouting distance of a hospital and a pizza place, they're not just building instruments--they're making monoliths.

Here are pipes sixteen feet tall, pitched against the walls like enormous tin crayons. Here is a skull-rattling assemblage of belts and saws, less a machine than a steampunk roller coaster, dedicated to the production of tiny pedal action units. Austin-one of the country's oldest manufacturers of pipe organs-may be crafting music machines, but you could easily mistake their output for the components of a space shuttle...the kind da Vinci might've dreamt up (or a kid with a particularly extensive Erector Set).

In an era of digital simulation, when even a singer's voice can sound synthesized, an Austin organ is a beautiful anomaly: behemoths made of wood, glue, and wind, constructed using machines that date back to the 1920s-and techniques that are older still. Looking at (or listening to) one of them, it's easy to understand why the instrument is a fixture of religious worship. The hugeness of an Austin organ, in sound as well as size, nearly overwhelms. But for the people who work at the Hartford plant, the instruments aren't just monoliths of the usual, biblically proportioned variety. They're monuments to craftsmanship, of centuries of tradition and slow, gradational refinement. They are monuments, ultimately, of the real.Chapter One: A Company Worth Saving

In 2005, before current president Michael Fazio purchased the company, Austin Organs was ailing. The Austin family, which had run the business since John Austin founded it in 1898, had run up against cash-flow problems. In a few years, revenue had dropped from $5 million annually to around $150,000; one client's failure to pay for an organ hit hard. Hartford, a city once called "the Insurance Capital of the World," had also fallen on challenging times. When Austin Organs temporarily closed up shop in March of 2005, the groaning of the factory doors could've been mistaken for a sigh of relief.

It wasn't always like this. In 1926, a peak year for production, Austin shipped 82 completed organs--a number that, today, would account for the sum total of the entire organ-manufacturing world. The company didn't just build organs; it built Austin organs, distinguished by historic innovations like the Universal Airchest, patented by John Austin when he was just 23. The system, still in use today, applies uniform air pressure to the organ's pipes. Peering into one reveals an array of stops, valves, and magnets that resembles something like a Victorian time machine.

Fazio, a church organist who also ran his own organ service and repair company, knew that what Austin needed wasn't a time machine back to 1926, but something far more practical: steady-handed leadership that could shepherd the company out of its financial doldrums and into the 21st century. The factory had only been closed for two weeks when he purchased it with his business partner, current CEO and longtime Austin employee Richard Taylor; within days, he'd brought a number of company veterans back into the fold.


Fazio himself has the buoyant, affable bearing of a favorite high school teacher--one who's truly dedicated to his particular subject. He speaks of organists approaching him at a hotel or airport like fans in the throes of Beatlemania. "I'll have a polo shirt with the company name on it, and people will literally come up to me," he says. "'Oh my god, I learned to play on an Austin,' in, you know, Tallulah, Montana or something. Or my grandmother played the Austin organ at our church. There's just a great history, and I don't want to let that go."

In addition to his administrative duties, Fazio also serves as Austin's tonal director, meaning he has to work with his ears as well managing his inbox. This is a different world than the one John Austin inhabited in the late 19th century, and while an Austin organ remains true to the company's original standards, from the pipes down to the pedals, client satisfaction has a bit more weight now than it did at the height of the Machine Age.

"I want to listen to what the church is looking for," says Fazio. "A small evangelical church will have a completely different sound than, let's say, the Calvinist, strong, rigid church down the road. And we can produce those same sounds with similar pipes, with similar specifications."

As the company evolves, there are still countless reminders of its rich history, from the original (now closed) site of the factory across the street from their current location, to the ghosts of former organ builders--inevitably invoked, Fazio says, whenever a set of tools disappears or a door mysteriously locks itself. He has little doubt that that's a history worth preserving.

"I've cost my own personal life a decade by working so hard to get all of this back on track," he said. "But I think the reward is that the company has achieved stability, and I don't see that that's going to change any time soon. Barring war with Syria, Russia, or Mars or something."

Building an organ is kind of like building a city. This is no assembly line job; this is a choreographed dance between various discrete departments, which ultimately come together to create something cohesive and wholly of its place.

The building blocks of an Austin organ are the pipes, chest, and console. The pipes, adjusted for tone and timbre by a voicer, resonate with the passage of air to produce the organ's sound. They're the iconic calling card of any pipe organ, especially when hundreds of them gather in dense, coral-like formations (the Curtis Organ in Philadelphia, built by Austin, has a staggering 10,731 pipes). The chest, on the other hand, produces and delivers wind to the pipes with uniform pressure. The console consists of the keyboards, stops, and pedals utilized when an organist sits down to play.

Despite the company's single-minded, perhaps even fetishistic dedication to old world parts and processes, look closely and you'll find sparing but pointed updates to the 19th century standard. The airchest, the heart of any Austin, now includes solid-state circuitry to control the magnets that connect to individual valves. Those magnets, meanwhile, are wound one by one on a machine that, dating back to the 1970s, is one of the newer contraptions in the plant.

The same can decisively not be said of the tools employed by Stewart Skates, a veteran pipe maker who's been with Austin since 1960. Skates trained at a metal shop in his native Belfast before answering the wanted ad that brought him to Austin and the United States. Walking through his pipe shop, he casually grabs mandrels and other pipe-making apparatus that wouldn't be out of place on a "Game of Thrones" set--or in a museum.

"This thing, maybe it's a hundred years old," he says, reaching for a particularly weathered soldering iron. "I have my own original I brought from Belfast."

Skates is one of those artisans whose deceivingly effortless craft can only be the result of doing the same few things day in, day out, until expertise and muscle memory are virtually inextricable. He speaks of working under former president Basil Austin ("a nice guy") and the composition--50 percent lead, 50 percent tin--of the spotted metal from which Austin pipes are wrought.

"In the beginning, I didn't really think of this as a special job," Skates says. "When I came here, I really saw for the first time where the pipes were going and what the product was. I had a different respect for the pipes, number one, and the organ business in general. I find this to be one of the better companies-which is probably why I had other offers to go somewhere else, but I didn't budge."

The men who dedicated their lives' work to building Austin organs, those supposed ghosts that still walk the corridors of the plant--they're as much a part of the company as the adopted feral cats that now freely wander the console department. Anne Wysocki, a voicer at Austin for 30 years, speaks of them fondly.

"When I first came there were quite a few men that were from Europe. And they were incredible craftsmen, and they put Austin Organs on the map," she says. "When I came back [after the company reopened], every time I'd go into a different department I'd hear the noises of the mill and I'd expect to see an old gentleman that used to have that position. And now when I walk around the factory, I see the people that work here now. And they have just as much pride in what they do as the men that worked here years ago."

Pride is part of the reason why Austin is still selling pipe organs in places as disparate as Birmingham, Alabama and Beijing. It's part of the reason churches are still willing to shell out for an Austin over cheaper, digital alternatives. Sure, you can synthesize the tone of the organ with considerable fidelity, but there's no substitute for the visceral effect of wind passing through pipes and vibrating air.

"Speakers crack and buzz and fall apart," says Fazio. "I have really good electronic circuits in my iPad and my PC, and I know that that PC is about a year-and-a-half away from blue screens and being useless. So you spend $100,000 on an electronic organ that may endure for 15 years, or you spend $500,000 on a pipe organ that will endure a century."

That's a difference that's evident in everything from the pedal action units to the tiny, hard-to-source eyelets involved in the building of armature valves. An old joke about the Austin organ, Fazio adds, is that it's a study in bent metal. And certainly, a stroll around the factory confirms that. Not a moment goes by that you're not stepping around a vintage metal-planer (used for sizing the raw material for pipes) or some other piece of industrial machinery. But an Austin organ is more than the sum of its components, however finely articulated. It's the result of decades of craftsmanship, of the various people who work here--as well as the gentleman ghosts before them. If any company dedicated to building instruments the size of an entire house has a chance of surviving another hundred years, it's this one.

"At the base level, I think people know what real means. The effect of real pipes, real strings, the emotional impact of the thing," says Fazio. He glances up impishly; the look in his eye could be described as a twinkle. "And here we are. Still here."