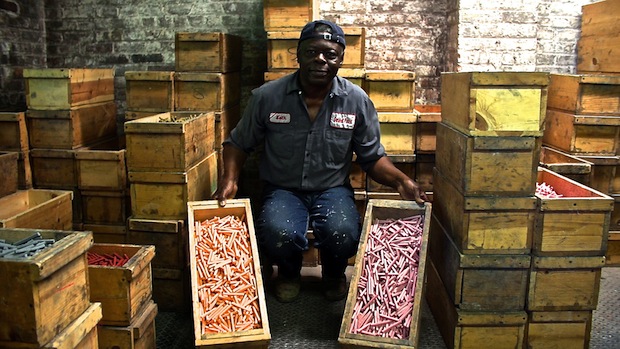 A rhythmic mechanical whir emanates from the basement of a century-old brick building on Fleet Street in a Jersey City neighborhood that's gentrifying as luxury lofts take over factories.

The painted words on the rear of this building not only proclaim what is still inside -- General Pencil Company -- they also hint at the factory's long history, with sturdy, tall white letters in a serif type often used as the 1800s turned to the 20th century.

The sound is the revolving cylinder of a ball mill softening graphite with river rocks -- the first step to make the cores that form the "lead" of a pencil. Step inside and some rooms give off aromas of the forest from the incense cedar that wraps around the graphite cores.

General Pencil has been making pencils here since its founder Edward Weissenborn left his first pencil endeavor -- The American Lead Pencil Co., which he opened in Hoboken in 1860 -- and moved the ball mill to the "new factory" here in 1889.

But even if General's pencil-making process is still defined by the 28 patents Weissenborn filed in the late 1800s on machines that date back to that time, the strategy for how a pencil company survives in a world of screens and keyboards is 21st century. Chapter One: "Drawing with a Piece of History"

Twenty-two years ago, Jim Weissenborn -- the fourth-generation family member who serves as General's CEO -- wasn't sure he wanted to keep the company he and his brother Oscar A. had run since their brother Hill died suddenly in 1980, followed six months later by their father, Oscar E.

Jim was living in California running sales for the company, while Oscar A., who went by the nickname Sandy, kept things going in Jersey City. But Jim began thinking about the offers that had come every once in a while from companies who wanted to buy General Pencil.

So in 1992, he signed up for a seminar on how to package a company to sell it. He took his youngest daughter, Katie, with him. At the time, she was a junior at the University of California at Santa Barbara studying Spanish.

But since she was four years old, Katie had gone with her father on sales calls and sold his samples off her makeshift display table in front of their house. While in college, she had been helping out with the company's marketing. Two days into the seminar, Katie knew she couldn't let go of a company that had defined much of her childhood and all her father's life.

But it wasn't just family that was driving Katie. An artist herself, she saw the power of connecting artists with the tools they used to create their work. "When the artists call us, they want to have a charcoal pencil that works the same way every time. We can't let these artists down," she says.

She graduated from college and joined the company, learning every part of the pencil-making operations. She soon became obsessed with how to keep manufacturing graphite pencils, along with chalk pastels and artists' charcoal sticks, in America.
"In the '90s, everyone was putting pressure on us to import products, cheap products. Something inside of me said, 'Part of who we are is we have this story and legacy that we've been making these products in the U.S.A. since 1860,' " she says. "You're drawing with a piece of history."

But sentimentalism isn't enough to keep a factory going. She knew the company had to be efficient and creative to be profitable and stay in America.

Notably, the Weissenborns have succeeded in working with the union that represents its employees to allow supervisors instead of machinists to adjust their machines. Union rules often restrict the jobs people can do, creating an artificial separation designed to preserve jobs. That can backfire when those job roles aren't flexible enough to support the fast-changing business culture of the 21st century.

"We started working with people more and trying to switch out from the old union mentality to a family community company. We try to mentor from within," says Weissenborn, now 44, married and with the long name of Weissenborn Vanoncini.

The company also shifted its focus externally, moving from providing schools with No. 2 pencils to creating specific tools for artists. Vanoncini helps drive that focus. She teaches art in schools in San Mateo, Calif. when time permits and is active in the Youth Arts Council of America.

That intimacy with the arts has helped General Pencil fill voids on the product side.

Every pencil, pastel or artists' charcoal comes with information on artistic technique to help teach the next generation of artists how to draw. Among its newest offerings are books on how to draw the pets, robots and space monsters created by Pixar cartoonist Matthew Luhn.

"Connecting with artists. Working with my dad. Keeping the jobs in the U.S.A. all became part of my soul and what I did," she says of what has kept her at General Pencil for more than 20 years.
Now the sixth generation is starting to feel that same connection. Weissenborn's granddaughter Kirstin Barrett Wojtowicz joined the company as an intern six years ago.

Within weeks, she knew she wasn't going to leave and now she runs sales and marketing. It was perhaps an inevitable career move for a woman who began her General Pencil career in the same seat and the same age as her aunt Katie, tagging along at age four to pick up materials at the docks in San Francisco and Oakland.

Plus, she gets to learn from her grandfather -- when he isn't indulging in his latest passion -- race car driving.

"I still tell people I'm new," she says, "because there is so much to learn."

Chapter Two: Dust in Their Blood

In October 2012, Superstorm Sandy tore through much of New Jersey. Millions of people couldn't get to work and factories stayed shut. But not General Pencil. Located in the Heights of Jersey City, it escaped the flooding that ravaged the lower-lying downtown area and nearby Hoboken.

More than half the workforce of 43 showed up, many of them walking from their homes nearby just as they do when it snows. The operation was back in full production within a week.

That dedication gets personified by employees such as Albert Nesmith, who has raised four children and has built a career out of a job he started almost 50 years ago. His first position -- when he was just 18 -- was working for Alfred Pischel, one of the General Pencil's chemists. Now 66, Nesmith oversees the colorful world of the pastels and white charcoal division, a part of the company once overseen by Jim's brother Hill.

The pastel trade could have died with him. A perfectionist, he was the keeper of the recipes for the colors, but he never wrote any of them down.

But Nesmith remembered the formulations, and then some. While not a formally trained chemist, over the decades he learned how to mix the pigments to bring the varying hues to life. He has added his own touches such as adding ingredients to make the pastel sticks stronger.
Making pastels is a long process. It's a daylong ritual to clean the machines between different color runs to prevent any contamination from the machines. Then it can take two months for a finished pastel stick to dry.

But Nesmith owns every part of the process up to the final test. Like a chef testing pastry dough, he can tell with his fingertips if the pastels are ready to ship from the bright white pastel factory housed in an old maritime building General Pencil purchased in 2006.

The light-infused building is in sharp contrast to the dark side of the business, the charcoal and graphite factory where fine dark dust invades every surface, including skin. "What we do is dirty," says Jim Weissenborn, who at 76 is "CEO on call" to help out when and where needed. "But we bring expression into the world."
Chapter Three: A Melting Pot Factory

General Pencil's workforce has always mirrored the diverse nature of Jersey City, which links by ferry to the immigrant landmark Ellis Island. Over its long history, most of General Pencil's workers were born far from America, bringing with them their languages and their customs.

While the differences could divide them -- there are 17 languages and dialects spoken at the factory right now -- what binds them together is the love of keeping the machines and the company going.

German Coronel is a machinist who learned his trade in Ecuador. His supervisor, Helmut Bode, is an electrical engineer trained in Germany.

Bode is formally schooled while Coronel has the hands-on knowledge. Put them together and they make a dynamic team that keeps the machines running -- not an easy feat considering many of them date back to the 19th century and are not made any more.
So Coronel must build parts by hand for machines such as the ball mill that can be heard from the street. Another is the chaser, which grinds the graphite and clay mixture down to a powder. The machines run from line shafts, which are overhead pulleys connecting the machine by leather belt to a motor.

When a machine breaks down or isn't working right, Coronel determines what parts need replacing. If Bode can't find a supplier, Coronel crafts the part himself by making an exact replica.

In some cases, Coronel creates the part and then sends it out for testing to make certain it will work on the old machines and make perfect pencils. For example, parts for the high-speed spindle that cuts the individual pencils must be balanced so there is no vibration.

Bode, formal when he is behind his desk, comes alive on the factory floor, showing off machinery that has been coddled and cajoled to stay running.

When he arrived 29 years ago, there was no way to get under a machine that had fallen through a rotting wood floor. There was no way to move it. He suggested using a pallet jack that would help lift it up, but there were no jacks anywhere in the factory. And workers were resistant despite the fact that they hauled everything -- heavy equipment and 50 pound boxes -- by hand.

They told him the jacks wouldn't work because of the many stairs and old wooden floors. Bode brought in one to pull the pencil making machine out of the ground. Now there are 10 jacks used on the floor to keep things moving.

"Success in life is surviving," says Weissenborn, who almost gave up on the company two decades ago. "You try to leave things better than when you started. We don't make a lot of money, but we have a lot of fun."
See More Made in the USA Stories
Tags
Read Full Story