Mortgage rates for 30-year fixed mortgages rose this week, with the current rate borrowers were quoted on Zillow Mortgage Marketplace at 4.01 percent, up from 3.99 percent at this same time last week. The 30-year fixed mortgage rate declined early last week, dropping to as low as 3.92 percent on Wednesday before rising to the current rate over the weekend. (See the chart below.)

"Rates hovered near 12-months lows, remaining below 4 percent for most of last week due to the markets' anticipation of the European Central Bank's decision to ease monetary policy to stimulate growth," said Erin Lantz, vice president of mortgages at Zillow. "This week, we expect rates to drift upward if the ECB's plans suggest a more worrisome picture of the European economy, or if the U.S. employment report reveals unexpectedly strong jobs growth when it is released on Friday."

What are the interest rates right now? Check Zillow Mortgage Marketplace for mortgage rate trends and up-to-the-minute mortgage rates for your state. 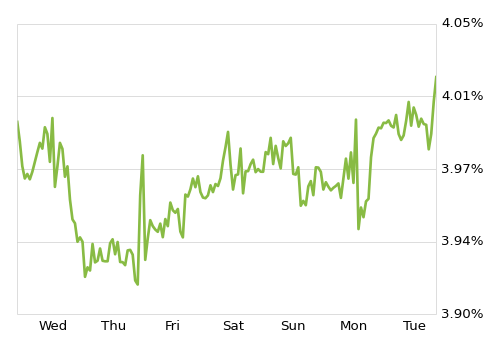