Why America's Most Affordable Homes Likely Aren't for Sale

The affordable homes most likely to be sought after by first-time homebuyers are also those most likely to be kept off the market because their current owners are in negative equity, or underwater. Underwater homeowners -- those who owe more on their mortgages than their homes are worth -- have a very difficult time listing and selling their homes, even if they want to, without engaging in a short sale or dipping into their savings.

Among all homeowners with a mortgage nationwide, roughly 1 in 3 (30.2 percent) who owned homes within the bottom third of home values were underwater in the first quarter, according to the first quarter Zillow Negative Equity Report. That's almost three times as many as in the top third of%VIRTUAL-pullquote-"It's hard to overstate just how much of a drag on the housing market negative equity really is, especially at the lower end of the market."% homes (10.7 percent). Among the middle tier, 18.1 percent of homeowners with a mortgage were underwater in the first quarter.

The national negative equity rate fell to 18.8 percent in the first quarter, with almost 9.7 million American homeowners with a mortgage underwater. More than one-third of homeowners with a mortgage (36.9 percent) are effectively underwater, unable to sell their homes for enough profit to afford down payments on new ones and comfortably meet expenses related to selling, such as real estate agents' fees and closing costs.

"The unfortunate reality is that housing markets look to be swimming with underwater borrowers for years to come," said Zillow Chief Economist Dr. Stan Humphries. "It's hard to overstate just how much of a drag on the housing market negative equity really is, especially at the lower end of the market, which represents those homes typically most affordable for first-time buyers. Negative equity constrains inventory, which helps drive home values higher, which in turn makes those homes that are available that much less affordable." 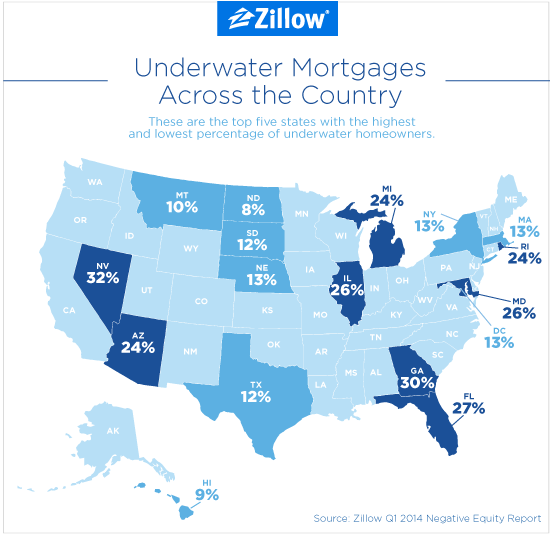