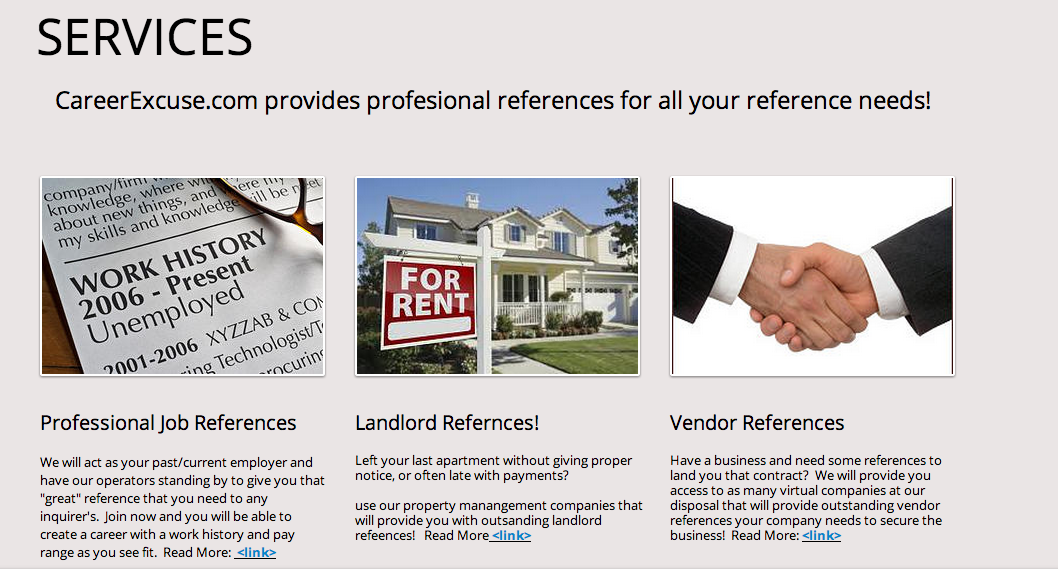 There's nothing particularly shady-looking about careerexcuse.com. A simple, if clipart-y logo, an actual phone number, clear explanations of services and pricing. But once you take a closer look at what's actually on offer, you can see why they occupy a considerable legal grey area.

For $125, careerexcuse.com will fabricate a career history you can use to fill out your resume. They'll create a phony website for a phony company, along with a phone number for a company representative waiting to serve as your phony reference.

"We will match your career field to one of our already established virtual companies!" they promise, forcing us to ask how an imaginary company can possibly be established.

The company, which also provides fake references for landlords and vendor applications, was founded by one William Schmidt after experiencing mass layoffs. The site describes itself as a utility for job-seekers who have been rendered unemployable by firings or long gaps in their resume.

To hear them say it, they're providing an important service to those stigmatized by the blight of unemployment. But not everyone sees it that way.

"I get lots of resumes, and I've seen people try to exaggerate it," Jack Dunn, Intel's campus relations manager, told KCRA. "They exaggerate the education, they exaggerate the experience. I see if fairly often, and it's unfortunate, because if you falsify information and you get hired, that could be grounds for termination."

While Career Excuse dodges claims of fraud by pointing out that a resume is not a legal document, that notion was shot down by employment attorney Phillip Mastagni, who told KCRA that lying to employers can put workers on shaky ground, especially those seeking state employment. He also pointed out that victims of workplace sexual harassment can lose a case if the company points out that they have a history of lying.

"Those little white lies that started out the career can come back years later to haunt you in ways you'll never imagine," he said.

Maybe give these guys a miss.
Tags
Read Full Story