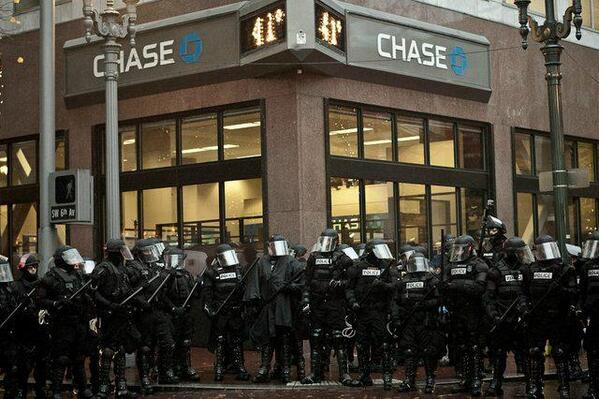 Lawyers have a saying: Never ask a question unless you know the answer you're likely to get. The New York Police Department might think of adopting something similar on social media.

Someone at the NYPD decided that it would be good for its image, relations with the public, and officer morale to show pictures citizens with New York's finest. So the department wrote on Twitter, "Do you have a photo w/ a member of the NYPD? Tweet us & tag it #myNYPD. It may be featured on our Facebook." Just one problem: They didn't ask for happy pictures and the hashtag turned into a bashtag, as the Daily Dot reported.

A search for #myNYPD on Twitter offered one image after another of citizens being beaten up and restrained by officers. The result has been a massive PR fiasco. For example, there was the AP photo of a demonstrator held down during a vigil for 16-year-old Kimani Gray, who reportedly had been shot and killed by plainclothes officers, according to the Guardian.

LOOK AT THIS PHOTO! The sad death of Kimani Gray, etc. Sadhbh Walshe http://t.co/LBp5SMojgZ via @guardianpic.twitter.com/764jeRC4AO

Do you have a photo w/ a member of the #NYPD? Tweet us & tag it #myNYPD. It may be featured on their Facebook! pic.twitter.com/Ps7rThxgNw

Free Massages from the #NYPD. What does YOUR Police Department offer? Tweet at #MyNYPDpic.twitter.com/IFWr8exuqH

Another image was a woman restrained by three police officers.

Then there was the man who was wrestled to the ground by three officers. (There does seem to be a trio theme.)

Someone captioned this image as "Protecting the corporations from the citizens since 1857."

The fiasco quickly went global as Twitter users in multiple countries--this one writing in Dutch--joined the party.

As Gawker pointed out, some New Yorkers posted more positive pictures--the type that the department had wanted to encourage in the first place. But the massive onset of negative ones quickly swept them out of view.

It may be that some of the images are taken out of context, that the police were responding to some threat of force. But it's hard to argue that an 84-year-old man who jaywalked was enough of a threat to explain allegedly being bloodied by police, as the New York Post reported in January.

Thank you #MyNYPD for beating down this 84 year old man for jaywalking. http://t.co/5rDwVZl37tpic.twitter.com/SgOJRKhbic

Or allegedly shooting a homeless man's dog while the man was having a seizure.

#myNYPD cares about noise control, so they'll shoot a homeless man's dog while he's having a seizure #NYPDpic.twitter.com/0N7KQqFhzX

Sounds like someone in the department needs to do some time in social media school.
Tags
Read Full Story