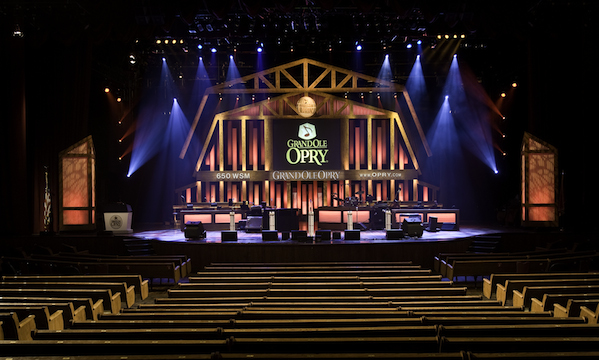 The venue seats 4,400 people, with the Opry drawing nearly a million guests each year. The Grand Ole Opry isn't just a show, however, it's also the world's longest-running radio show, having broadcast for 4,500+ (and counting) consecutive Saturday nights.

Celebratory events begin March 15 with the 650 AM WSM / Spring Mountain Farms 5K Run & Walk at 7:30 a.m. It's followed by the release and signing of the book Backstage at the Grand Ole Opry, an all-access, behind-the-scenes look at country music's most famous show, complete with more than 250 exclusive photos from the show's archives. That night, Blake Shelton, Miranda Lambert, Clint Black, Diamond Rio, Josh Turner and more take the stage for two performances of the Opry House 40th Anniversary show.

Complimentary self-guided backstage tours will run throughout March 16, as well as a second backstage book signing of Backstage at the Grand Ole Opry.

As you might imagine, a lot has happened within the hallowed halls of the concert hall over 40 years. Here's a list of the 16 most memorable moments

3. Barn Dance was first dubbed the Grand Ole Opry in December 1927, and the name stuck.

10. Drums were played in a performance for the first time by western swing bandleader Bob Wills on Dec. 30, 1944.

11. The first use of a trumpet in a performance is on April 14, 1945 when "Taps" is played to mark the passing of President Franklin Roosevelt two days before.

14. Hank Williams made his debut June 11, 1949, and the audience calls him back six times to play "Lovesick Blues."

19. The Everly Brothers make their debut on May 11, 1957, the same week their first single, "Bye Bye Love" enters the country charts.

21. Charlie Pride becomes the first African-American solo singer to perform on Jan. 7, 1967. He becomes a member of the cast in 1993, after a standing offer to join of more than 25 years.

23. For the first time in its history, a previously taped show is broadcast on April 6, 1968, because of an enforced curfew in light of Dr. Martin Luther King, Jr.'s assassination.

24. Garrison Keillor is inspired to start his own radio show, "A Prairie Home Companion," after covering the final Opry broadcast at the Ryman Auditorium on March 15, 1974.

6 types of cocktail glasses and why they're used

Shop Sur La Table cookware for up to 65 percent off