Share
Erik Sherman
There are two rules for any employee with a personal account on Twitter: 1) the boss can likely see what you're doing, and 2), acting in a controversial manner could get you in trouble or axed. It's pretty simple, as food workers, teachers, and others have found.

You'd think that people in public relations would be among the first to recognize the potential problems. After all, they get paid to manage the public image of celebrities and corporations. They've seen all the mistakes and dangers dozens of times and regularly have to tell people what not to do. But sometimes the people who should know best don't seem to when it comes to their own actions. At least, that allegedly seems to be the case for Justine Sacco, whose LinkedIn profile shows her position as senior director of corporate communications at IAC.

In case the company name doesn't ring a bell, IAC is one of the biggest holders of Internet media brands there is. Its properties include Match.com, Vimeo, About.com, OKCupid, The Daily Beast, and CollegeHumor. IAC claims a combined 1.1 billion monthly visits across more than 150 brands and products. This is big media where reputation means a lot. Savvy communications people are careful about what they say and how they say it, particularly in a forum that can connect them to their employer or a client. 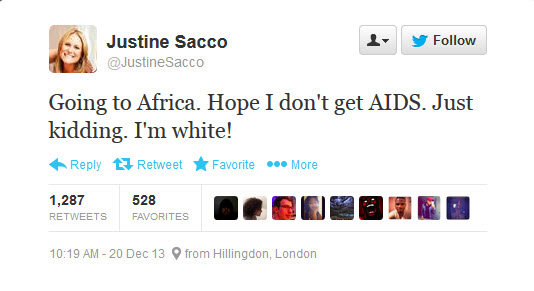 Some responses included, "Is this a parody account?" and "Are you stupid?" One particularly sharp comment, according to ValleyWag, came from her employer:

This is an outrageous, offensive comment that does not reflect the views and values of IAC. Unfortunately, the employee in question is unreachable on an international flight, but this is a very serious matter and we are taking appropriate action.

That doesn't sound good. Now, to be fair, it could be that someone hacked into Sacco's account and put some words in her mouth, although Twitter indicated that the tweet came from London's Hillingdon borough, the location of Heathrow airport, a major connection for international flights. Here are a couple of other tweets that came at around the same time: 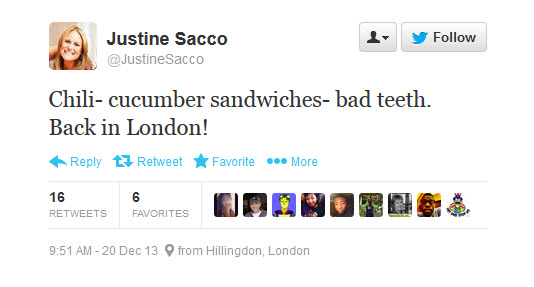 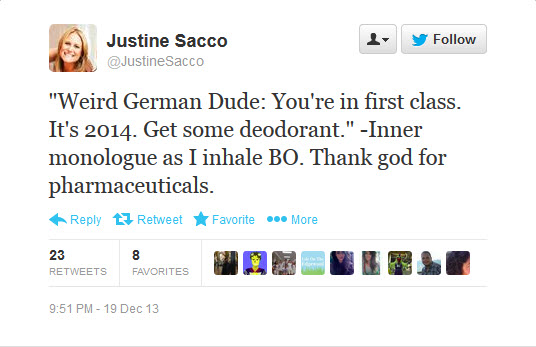 And it's not as though Sacco's account never showed signs of snark tweets in the past. Here's one from November 26: 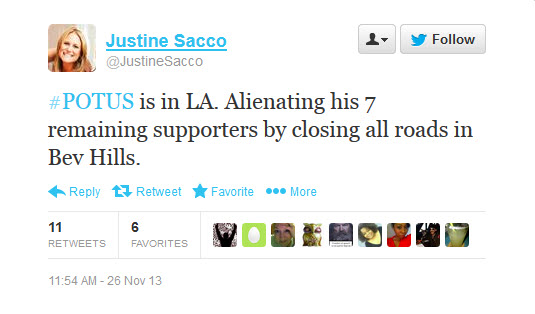 Or one from November 23, apparently as she sat with a large dinner party at a restaurant: 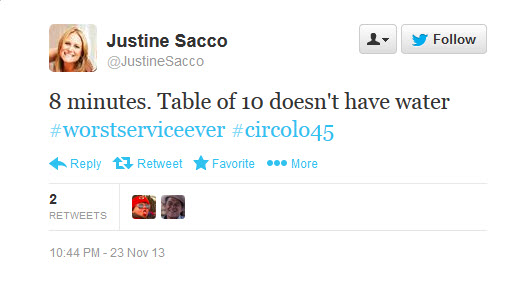 Or this one from November 4: 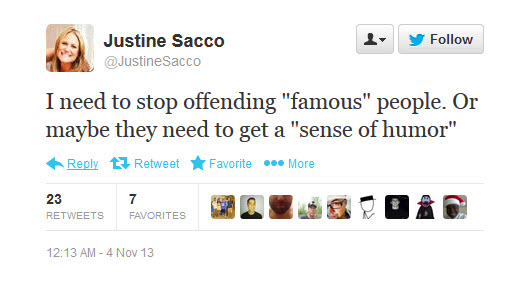 Does the latest tweet seem completely out of character? That is for others -- including her immediate superiors -- to decide. One thing is for certain: No matter how bad the landing might seem, it will be nothing compared to the first phone call she gets when she can turn her cell phone on again.
Tags
Read Full Story