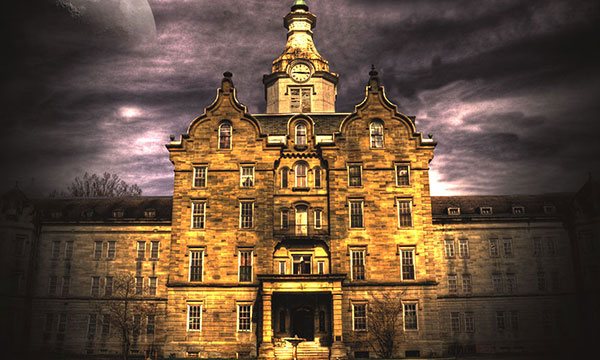 If you've ever experienced a getaway so good that you never wanted it to end, you might empathize with the ghostly guests who checked in to -- but never left -- these spooky spots. Each touts twisted tales and sordid stories that have lingered through the ages. If you ain't afraid of no ghost, sign up for a stay and keep a watch for things that go bump in the night.

This 19th-century historic hotel, tucked high in the Ozark Mountains, wasn’t always an idyllic retreat. In the 1930s, it served as an experimental cancer hospital, helmed by an unscrupulous and unlicensed “physician” who swindled unsuspecting cancer patients out of their money and sometimes their lives. Apparitions of “Dr. Baker,” a gurney-pushing nurse and a long-suffering cancer patient have been reported, while the dodgy doctor’s old on-site morgue, complete with autopsy table and walk-in freezer (once used to store cadavers), remains intact.

Deep in the South near Baton Rouge, this old plantation house-cum-hotel bills itself as “one of America’s most haunted homes.” The 1796 estate was allegedly built upon an old American Indian burial ground (never a good thing, as any horror film buff knows). Included among the paranormal presences are “Chloe,” a former slave who was lynched here, and the spirits of several children who are said to have died at the house from various incurable diseases.

Cashtown, Pennsylvania
Gettysburg was the site of the Civil War’s bloodiest battle, claiming more than 50,000 casualties in 1863. The purported ghosts are accordingly numerous, and a bevy of historic bed-and-breakfasts, many of which were converted into field hospitals during the war, host both living, paying guests and the spirits of soldiers who never left. Try the nearby Cashtown Inn, a stagecoach stop established in 1797. A Civil War landmark, it served as a Confederate headquarters and sheltered gravely wounded soldiers, some of whom met their untimely demise -- and remain on the hotel’s permanent guest roster.

This grand dame of the high seas, dating to the 1930s, once shuttled the world’s elite across the Atlantic and served in World War II as a troop carrier and hospital ship. Today, the Queen Mary is permanently moored in California’s Long Beach Harbor as a floating hotel that has reportedly attracted some spooky stowaways during the course of her long journey. Sightings include a “lady in white” who lurks in the ballroom and a lost little girl who wonders about, doll in hand. The ship’s regularly hosted ghost-hunting tours guide guests to the most ghoulish spots.

Set in the shadows of the Rockies, the appeal of this legendary grand estate is seemingly transcendent. Several spirits are said to be in residence, including past employees (a spectral housekeeper still arranges guests’ belongings in room 217), former guests (giggling children’s spirits roam the 4th floor) and even the former hotel owner and his wife (the Stanleys wander the lobby and tinkle the piano keys). It’s little wonder that the property was the inspiration for horror master Stephen King’s “The Shining,” the film adaptation of which plays on a loop in all guestrooms.

You can spend the night in this spooky castle-like old prison, but don’t plan on getting much shut-eye. In fact, sleeping is prohibited during the Ohio State Reformatory’s overnight “Ghost Hunts,” occasionally held for brave souls interested in paranormal investigation. Some 155,000 criminals were housed here in often overcrowded conditions that bred conflict and disease. More than 200 of them never made it out alive, as evidenced by the grim on-site cemetery. Look for the infamous “hole,” or isolation chamber, that was known to drive inmates mad. Today’s visitors claim that some of their spectral presences persist, as does a tangible sense of gloom and doom.

The Wild West was rife with deadly brawls and gun-slinging tragedy, and despite the elegance of Santa Fe’s landmark La Fonda on the Plaza, its setting was not spared strife. The plush adobe inn, a former Harvey House and stop on the Santa Fe Trail, is reportedly set on the site of the town’s old gallows and was the crime scene for an 1867 murder, whose victim, a chief justice, is said still to wander the hallways. Another ghostly guest is a distraught salesman who supposedly killed himself in the local well -- his spirit sometimes emerges from the fountain in La Fonda’s restaurant, La Plazuela.

This eerie B&B, set just outside Providence, R.I., was the family home of notorious alleged ax murderess Lizzie Borden and the site where her father and stepmother were hacked to death in 1892. While there are no apparent ghosts here, you can revisit the scene of the grisly crime by bunking down in one of the gruesome guestrooms (formerly those of the Borden clan), peruse the murder-inspired museum collection and pop into the gift shop for your own ghastly keepsake (hatchet earrings, anyone?).

Opened in the mid-1800s, this West Virginia hospital served as a treatment center for the mentally ill for more than a century. Its long and sordid history is rife with tales of Civil War raids, gold heists and, of course, the thousands of committed patients who lived -- and sometimes died -- here. While the hospital facility itself is no more, the activity of the place continues, with investigators (like Syfy's “Ghost Hunters” and the Travel Channel's “Ghost Adventures”) and tourists hoping to catch an apparition sighting or encounter with disembodied voices and sounds. Sign up for overnight ghost hunts, lasting until 5 or 6 a.m. You’ll explore rambling wings of dark, dank corridors, the medical center (the onetime site for shock treatments and lobotomies), forensics quarters and geriatrics buildings.


We are showing you how to eat, drink and be scary this Halloween season. Read more about Halloween on AOL:
Follow AOL Travel on Facebook and Twitter
Tags
Read Full Story

This foundation claims to last 24 hours — I tried it