Share
Dan Fastenberg
There have been stories of partying celebs leaving huge tips and even ordinary folks being extravagantly generous, such as the one who reportedly left a $500 tip on a $5 tab. But a Reddit user, calling herself randomdazee, claims a customer left her a jaw-dropping tip of $200,000 on a bill of just $111.54, and she posted the receipt as proof.

The receipt doesn't contain identifying details, so the authenticity couldn't be confirmed. Some users on Reddit, an online community, were immediately skeptical, and the user claimed to be a St. Louis waitress and had never posted under that name on Reddit before. She never got the money; in one call to the credit card company, she learned that the company wouldn't honor such a tip. (The bank reserves the option to bounce back tips that are more than 30 percent of the bill, she wrote.)

The waitress's first reaction to the tip was exactly what you might expect. "I basically couldn't function at this point," she wrote on Reddit. It's "pretty life changing to even think about getting that kind of money."

But the waitress is hopeful the tip was sincere, and says if she could talk again to her "guardian angel" she'd "thank her for the sentiment." The story however may not yet be over: "It'd be cool to know why she was possessed to give me of all people that kind of money," the waitress also wrote.

The waitress said she purposely chose not to identify herself or her employer because she "kinda [sic.] want [sic.] to keep my job," as she wrote. She said she knew something was up when "two mid-20s sisters" came into her restaurant and began "tossing a LOT of cash" at other patrons. They were accompanied by another man, she said.

The sisters were apparently blowing off some steam after a "personal trauma," and so were appreciative of their helpful waitress. "Don't tell my sister how I tip," "Today I'm your guardian angel," one of the sisters reportedly told the waitress before leaving the big tip.

Some commenters on reddit wondered whether the customers were in fact trying to purposely "scam" the waitress. "The person just has to put something 'impossible' on the bill, and Visa will not process it," as Reddit user dare978devil wrote.

While the St. Louis waitress may never know whether her customer actually wanted to give her such recognition, it's common for waiters and waitresses to receive feedback on receipts. And it's often not very kind. As AOL Jobs earlier this week, one Red Lobster waitress says she was given a receipt on which a customer chose to write a racial slur instead of giving her a tip.

AOL Jobs will update this story as it develops. 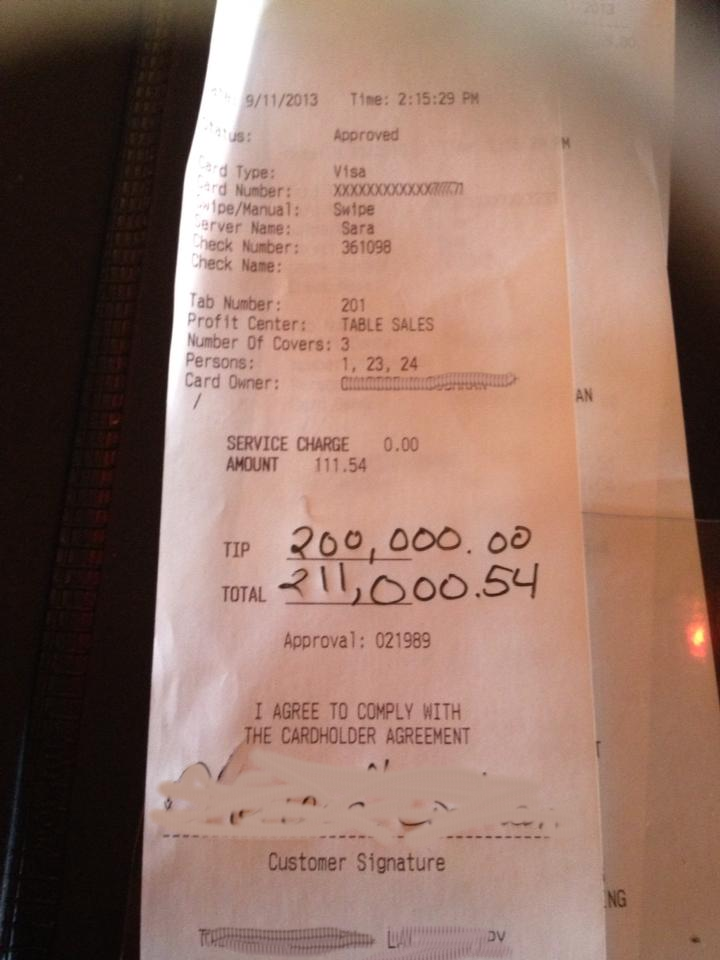