A Quest for Beer's Holy Grail 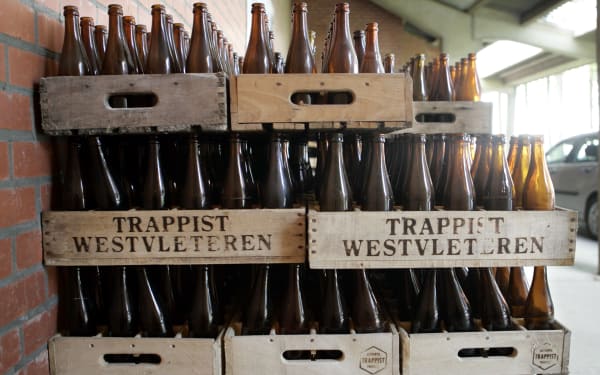 On the last train of the day from Bruges to Brussels, as I realized the irony in fighting jetlag by counting the sheep in the passing Belgian farmland, I momentarily questioned the cost--benefit ratio of my trip. Half a hemisphere from home, with heavy eyelids, sore feet and an iPhone that functioned only as a ticking clock, the ultimate goal of my journey was still nowhere to be found.

But travel, after all, is when desire outweighs inconvenience. You want something that is farther away than you would normally go to get it, but you go anyway because that thing is somehow worth it. People do it to learn a new language, to experience a new culture, to be with someone they love. I did it to try a beer.

I have been an enthusiast/poser in the burgeoning Chicago craft beer scene for a few years now. I can't profess to be able to tell the difference between noble hops and those of common ancestry, but when I heard of a quadruple ale so delicious it holds the number one and six ratings on beerankings.com and beeradvocate.com respectively, so mysterious its pious creators rarely comment on it publicly and so rare it can be found only in a handful of spots in Belgium, inconvenience lost to desire in a blowout. Next thing I know, I'm on a plane, off to find what many believe to be the best beer in the world.

This beer is Westvleteren 12. One of eight breweries in the world run by Trappist monks, Westvleteren is renowned by beer nerds both casual and pretentious for its taste-bud-scrambling quality. Unlike other foreign delights such as doner kebabs and cobblestones, this beer isn't instantaneously ubiquitous as soon as I land. Westvleteren is rumored to be brewed about as frequently as I change my clocks for daylight savings, so, even in Belgium, its home country and a land where they seem to bottle more beer than Aladdin does genies, I have to know exactly where to look to find it. My search began in Bruges.

Due to lack of funds, limited vacation days and the impulsive nature of my trip, I had approximately 24 hours in Belgium. Every minute I spent not drinking the best beer in the world was an abhorrent waste, so it made sense to start in a town famous for its ability to take visitors back in time. When I arrived in Bruges, I felt so feudal I'm pretty sure I had several serfs to my name, but still no Westvleteren. A friend and former denizen of Belgium had told me this elysian elixir could be found somewhere in town but unfortunately left out which bar. In Bruges, that meant searching for a needle in a haystack of straw with double-digit ABV percentage.

I went bar to bar, canal to convent, Belfort to Basilica, and although no door led to Westvleteren, the trip to this living postcard of a town was not a waste. One thing Belgians love to do as much as drink and brew beer is to talk about it, and striking up a hoppy discussion with some locals gave my quest its next lead, a lead that took me to Brussels.

So there I was, fending off sleep on the last train to the capital, where I could only pray this would all pay off -- a tactic I thought the brewers of my liquid objective would appreciate. Westvleteren's flavor may make it famous, but its creators give the beer its mystical, near holy aura. Trappists are cloistered monks, after all. If they applied a fraction of the dedication and meticulousness to their brewing that they do to the rest of their lives, their beer would only naturally taste like Jesus in a bottle, right?

Last year the brewery exported an extremely limited number of cases from Belgium in a "one-time-only" promotion to raise renovation money for the monastery whose upkeep is the beer's sole reason for existence. In the States, you may have seen droves of drooling late-20s guys lined outside a liquor store like it was auctioning tickets to heaven or dates with Kate Upton. That was for Westvleteren, and supplies lasted about a day.

According to my new friends from Bruges, Westvleteren isn't much easier to buy in Brussels, where apparently only one bar serves the beer. All I knew was the bar's name (four French words that translate to "the Good Old Days"), that it would be very difficult to find and that it was near the spectacular center of the city, Grand Place. Seemingly the reason words like "ornate" were invented, every inch of every building in this incredible square is centuries-old Skittles for the eyes, and on summer nights it's all illuminated by a multicolored light show that locals and visitors sit on the cobblestones to ogle and toast to.

I managed to pull myself away from this arresting rectangle of resplendence and into the surrounding web of pedestrian shopping streets. I wandered past chocolate boutiques, souvenir shops, a very uncoordinated breakdancer and then a peculiar arch leading to a stone alleyway. A sign hung over the arch with four very familiar words: "Au Bon Vieux Temps." Down the alley was a door leading to a very old bar. Inside the bar were wooden walls, stained glass and a beer menu. The last item on the menu: Westvleteren. And written next to it, in four different languages, "The best beer in the world."

After this point the details really stuck with me. Like the beer's carbonation. Rather than clobbering me with American beer's bloated linebacker bubbles, Westvleteren's CO2 fizzed with the shiftiness of a train station pickpocket. Or the way its flavor subtly changes with each sip, altering as it gets warmer like an alcoholic mood ring. Or the beer bottle itself: a simple dark brown container with no label, the kind of thing you'd find tucked away in a cobwebbed Hogwarts potion cabinet.

In many ways, drinking a Westvleteren in Au Bon Vieux Temps is the polar opposite of visiting the extravagant Grand Place. Only a few yards away, here I was in a modest bar nearly hidden entirely from public view, drinking ale from the most unassuming bottle of all time. But all of that was a sneaky diversion. The taste of Westvleteren is every bit as intricate as the carvings adorning Hotel De Ville; it's just not as easy to find.

Is Westvleteren 12 the world's best beer? I'm not sure that's something anyone can really determine. Does it taste like an angel riding a Pegasus wreathed in flames? Yes, without a doubt. In the ongoing war between desire and inconvenience, this battle proved more than worthy. The moment I entered Au Bon Vieux Temps, every dead end and wrong turn I had taken retroactively became integral steps in this strange, impulsive quest. Sharing one of the rarest brews on the planet with the bar's regulars as they recommended my next drink for me, the flight, the jetlag and the uncertainty all went out the stained-glass window.

This popular brand makes fine jewelry for under $80

Check out this baby ninja's moves