Light is your best friend. Light shows you the way, exposes your enemies. Light burns the monsters that dwell in the dark, reveals their weak underbellies, keeps you alive.

Light is your worst enemy. Light makes you a beacon in the darkness. Light brings the beasts and the bullets. Light will get you killed.

You'll be thinking a lot about the shadows in Metro Last Light. Where to go, how to get there, are there any light switches, how does nobody notice all that shattering glass when you shoot out bulbs and darkness descends?

Shooting in the Dark

It's a fairly easy game to play as a stealth shooter, helped by the handy visible/invisible tracker on your watch. You're helped even more by the fact that most guards can barely see what's right in front of their faces when you're not in direct lighting, making it very easy to bop them on the head or stab them through the neck.


I very much like the new HUD and weapons overhaul. A weapon found on the ground has its upgrades highlighted so you can instantly see what advantages it might have over your current weapon. Buying bullets in a shop no longer requires you to recognise the different types on sight alone. They've also changed the weapon system so you can only carry three guns, but it's any three you might want, rather than having slots per weapon type.

My weapon of choice was a silenced pistol with upgraded stock and IR sight because it was perfect for distant headshots while still useful at short range. I complemented that with an assault rifle for enemy hordes and an automatic shotgun for close-range work. If you prefer, you could carry a sniper rifle and pair of shotguns; one modified for high damage and the other with a longer barrel for keeping enemies at bay.

Veterans of Metro 2033 will recognise a lot of Last Light, set a year after the game from 2010 and also based on the series of Dmitry Glukhovsky books. (Fun fact: His books are the only ones to survive the nuclear apocalypse with covers intact). 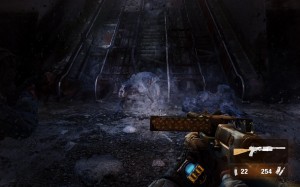 Over in one part of the Metro is the Reich with their Nazi (or more accurately, neo-Nazi) imagery and philosophies. In another, a simple fishing village where children play with toys and watch shadow puppets. In our section, a militaristic group known as Rangers are hoping to build a better life for everyone.

So much of Metro's story is told through the world and this is probably its biggest flaw. It's a depressingly realistic version of a post-apocalyptic Earth, full of depth and life, even as the planet's surface withers under radiation. In creating such a linear story-driven adventure, 4A Games quite rightly leads our protagonist Artyom through a series of snapshots showing the many facets of such a world. The problem is that much of the actual core story is also told through this environmental technique. 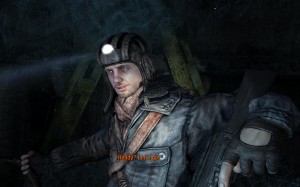 Pre-rendered cut-scenes are skippable but the main story unfolds as dialogue that happens while you're trapped in a briefing room, incapacitated or otherwise unable to do anything.

Sure, your companion characters are great – it's hard not to bond with Pavel as he talks and talks (and talks). But a surprising amount of the story is told by the background characters chatting among themselves about things happening elsewhere in the Metro. Your choices are to stand in each room of a population hub, listening to anything and everything and piecing the important parts together later, or to ignore some and risk missing out on crucial plot points.

Doing the first absolutely ruins the pace of the game. Sure, ambient dialogue is great but standing around listening to NPC narration isn't fun. I did the second, more by accident than design because I didn't realise until later that so much would go unexplained during the campaign. I learned more about what was going through the diary page collectibles that are hidden around each map than I ever did from paying attention to the dialogue.

When you're not being forced to do nothing while voice actors exposit plot around you, the action is quite satisfying. Normal mode seems easier than Metro 2033′s but I still found myself with a few difficult battles. Much of this, however, was down to the sheer number of enemies flinging themselves at my throat rather than any tactical challenge. 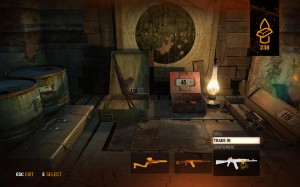 The mutants may swing from pillars and rush across the ground but they're always charging straight for you. Where humans in 2033 would be instantly alarmed by seeing their comrade's body in the distance, their Last Light counterparts practically need to fall over a body before they'll notice it, or you.

You won't find any traps for the unwary in a combat arena, making the stealth approach more about avoiding headlamps and switching off light sources than really paying attention to where you're going.
I will say that Normal mode is probably too easy for most hardcore shooter fans, which seems to be the trend these days if you look back at Tomb Raider and BioShock Infinite. Military grade bullets as currency has always been an interesting mechanic, but with my habit of exploring everything to gather as much as possible, I never found myself short on standard ammo. In the early stages of the game you may as well not bother buying weapon upgrades, as you'll find plenty of improved guns lying around. That said there are weapon types for every play style so if you do see the perfect gun on sale, grab it and you'll never need another.

[Edit: I've now played about 5 hours on Hardcore difficulty and it's really not that much more difficult. Stealth is ridiculously easy as well. There's enough elsewhere that I'd still recommend buying the game but check out this gameplay video taken from my Twitch stream.]

Check out The Average Gamer for the final verdict >