Black Ops II has gotten itself a new map pack. If you're a 'Season Pass' holder then Uprising is already likely in your download queue or on your harddrive, but is the Uprising DLC worth 1,200 Microsoft moon-dollars (or your platform equivalent) and your time?

The immediate comparison to make is Uprising versus 'Revolution', Black Ops II's previous DLC pack, is Uprising better? The answer is: yes and no. It really depends how you like your Black Ops II. If you like zombie flavour: then you will definitely have a bigger blast with Uprising, but if you like your multiplayer frenzy fresh and exciting: Revolution would likely be a better choice. However, in an ideal world, why not have both? 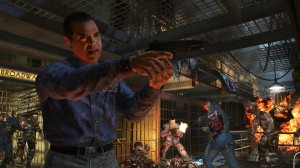 MOB OF THE DEAD. You're in Alcatraz prison in the 1930′s, planning an escape right as the outbreak occurs, leaving you to fight your way passed the zombie hordes of the remaining Alcatraz guards and inmates. The four playable characters are all inspirated by fictional mobsters: Michael Madsen as Finn O'Leary, Joe Pantoliano as Albert Arlington, Chazz Palminteri as Salvatore DeLuca, and Ray Liotta as Billy Handsome. If you're a fan of mobster movies and television then you'll be grinning like a goon at some of those names.

The close-quarters action of Alcatraz leads to many tense, exciting hordes. There's a wide array of pathways and areas to unlock and open throughout the prison, and though the ultimate goal is to escape Alcatraz, with many different paths combined with the large prison island creates the best, most heart-pounding zombie map on Black Ops II yet. If you love zombies, or gangsters with a wicked sense of humour, then you owe it to yourself to join the mob.

ENCORE. Taking in place in an open-air arena in London, Encore is the weakest of the four multiplayer maps on offer in Uprising. The central stage area leads to intense 'King of the Hill' style gameplay in almost every mode, but the outskirts of the map, mostly consisting of bland seating walkways, are long and often cause nothing but frustratingly long runs between spawning and action.
The aesthetics of Encore overall feel rather bland, and uninteresting. Though the map is based in London, and the background outside the map reflects this, the map interior could be a cookie-cutter version of any arena anywhere in the world. Spawn-killing is rare, due to the long distance between opposing spawn points, but there's little else to Encore. It's not the worst Black Ops II map, but outside of Capture the Flag it's rather dull. 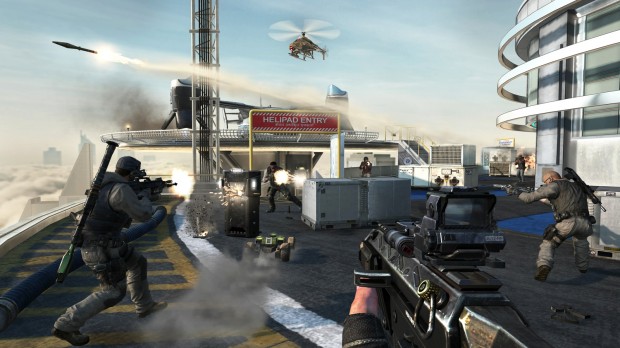 VERTIGO. Hands down, with very little doubt, this is the best map in Uprising's arsenal. Vertigo takes place on the roof of a high-rise skyscraper style building in India, though again it could very well be any skyscraper visually, and is excellent across all modes. The spawn points are well balanced, the gameplay remains fast-paced but doesn't require non-stop rushing, and the central room has many entry and exist points meaning both siege and defence of map control is challenging yet rewarding.

The basis of the map is that there is always a way out, whether through one of the many pathways or doors, even sometimes by taking shortcuts out of windows and via ladders. If you're not paying close enough attention you can even wander off the multitude of edges during a firefight. My personal favourite mode on Vertigo was Domination, with all three capture points being strategically placed for near perfect balance and nigh-exhaustive action. Vertigo wins King of the Uprising DLC (at least for multiplayer maps).

Read more at The Average Gamer >

The Eternal Appeal of Egyptian Revival Jewelry
The Adventurine