Is TASER Destined for Greatness?

Every investor can appreciate a stock that consistently beats the Street without getting ahead of its fundamentals and risking a meltdown. The best stocks offer sustainable market-beating gains, with improving financial metrics that support strong price growth. Let's take a look at what TASER International's (Nasdaq: TASR) recent results tell us about its potential for future gains.

What the numbers tell you
The graphs you're about to see tell TASER's story, and we'll be grading the quality of that story in several ways.

Growth is important on both top and bottom lines, and an improving profit margin is a great sign that a company's become more efficient over time. Since profits may not always reported at a steady rate, we'll also look at how much TASER's free cash flow has grown in comparison to its net income.

A company that generates more earnings per share over time, regardless of the number of shares outstanding, is heading in the right direction. If TASER's share price has kept pace with its earnings growth, that's another good sign that its stock can move higher.

Is TASER managing its resources well? A company's return on equity should be improving, and its debt to equity ratio declining, if it's to earn our approval.

By the numbers
Now, let's take a look at TASER's key statistics: 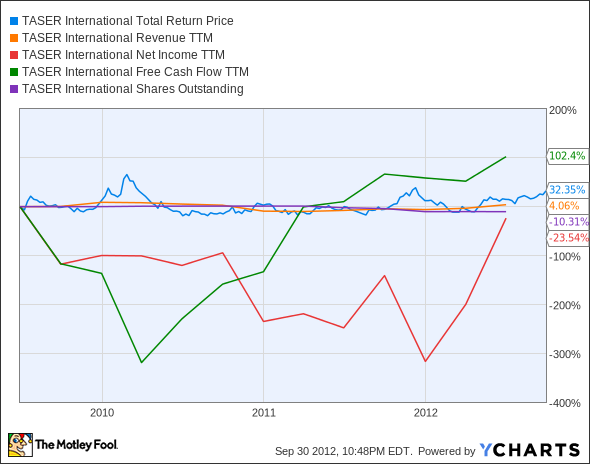 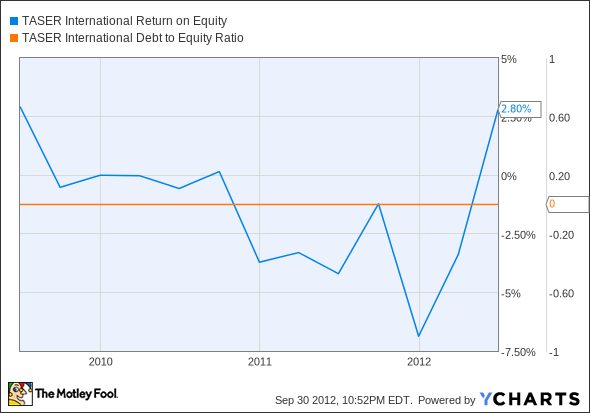 How we got here and where we're going
TASER's rough history hasn't yet been overcome in satisfactory fashion, and the company earns only two of seven possible passing grades. Dividend payouts might have earned the company extra points, but TASER has never paid dividends. Here's hoping that changes as the company tries to stabilize its earnings.

TASER's gained a solid 40% in the past year, but it hasn't enjoyed the same growth as gunmakersSturm, Ruger (NYSE: RGR) and Smith & Wesson (Nasdaq: SWHC) , which are up 95% and 337%, respectively, over the same period. There's something about the sense of protection a gun offers that TASER can't quite match, and hysterical propagandizing over the possibility of an Obama administration crackdown on gun ownership has sent millions to their local gun dealers for a fresh firearm or five. That's given the gunmakers a huge boost, while TASER's top and bottom lines have grown at a far slower pace.

Longtime Fool contributor Rick Munarriz sees better times ahead for TASER in the wake of a horrific movie theater mass murder. A shootout in a dark room is a dangerous proposition regardless of each shooter's intent, but TASER's non-lethal defense might be appealing to spooked consumers in search of better alternatives.

The Fool's CAPS players don't like TASER's chances, but JPMorgan analyst Paul Coster does. Coster recently upgraded the stock's price target to $7.50 on optimism that TASER's stun guns and police video systems will be growth drivers, and that the company would focus less on new products and more on improving the leverage of its existing lineup. As a play on public defense purchases, TASER seems like a better buy than ammo makers Alliant Techsystems (NYSE: ATK) or Olin (NYSE: OLN) , both of which have seen their bottom lines decline and stock prices (at least in Alliant's case) flatline this year.

Putting the pieces together
Today, TASER has few of the qualities that make up a great stock, but no stock is truly perfect. These numbers are likely to change over time, so it's important to keep track of TASER's progress. The Fool is here to help. When you add TASER to your free personalized Watchlist, you'll get updates whenever we uncover any news you'll need.

TASER could be one of the stocks that could take off after this year's elections, but it's hardly alone. Many companies are vying for Uncle Sam's favor, and the few that succeed should reward shareholders for years to come. The Fool's identified four stocks that could skyrocket after the election, and we cover each in depth in our latest free report. Find out more at no cost -- click here now to get the information you need.