Grab This Nearly 4% Dividend for Cheap

Look at the graveyard holding once-great companies. There's a large monument to Kodak, inventor of roll film and amateur photography. Nearby, there's a smaller headstone for Blockbuster, creator of late fees at a large scale, and Borders, innovator of passing off future business to its largest online competitor. If you stay around this graveyard long enough, some say you might see other innovators laid to rest: The more pessimistic and controversial say Apple (Nasdaq: AAPL) is on its way out, but I believe a majority have also written off Intel (Nasdaq: INTC) , which makes its stock cheap for those unready to be pallbearers.

Why should you hold off the on reading Intel's last rites?

Competition
The first thing pessimists will point to is Intel's lack of presence in mobile computing. Chip designer ARM Holdings had a 95% market share in mobile phones in 2010, and a 10% share in mobile computing. Companies such as Samsung, Texas Instruments (Nasdaq: TXN) , and Qualcomm (Nasdaq: QCOM) use ARM designs to manufacture their processors. It seems pessimists believe smartphones and tablets will do all the work in the future, and offices will be made up of people constantly walking around a track instead of seated at desks, while their work will consist of low-intensity programs like Internet surfing, email, and word processing.

But this isn't going to happen, and the semiconductor industry, which Intel still dominates, will depend on both server, mobile, and desktop systems:

Mobile efforts
Intel is also making headway with its own mobile efforts, with a 17-year Apple veteran, Mike Bell, leading the development of chips for phones. It launched a smartphone, the Xolo, in India earlier this year, and it recently announced a Motorola RAZR for Europe and Latin America. Analysts expect Intel to release a new mobile chip next year with double the performance of its current phone processor, and another chip by 2015 with four times the power and efficiency. Intel will have to win over developers and phone makers to optimize software and incorporate its chips, but if Intel can provide superior technology, which it has done in the traditional computer market, these players should accept Intel into the mobile fold.

Intel's survived through industry changes before, and it has the management and resources to keep on keepin' on. (The company spent $2.5 billion on research and development last quarter, compared with ARM's $53 million.)

And now's the time
Because of mobile worries, the stock has dropped 20% over the past six months and trades at a price-to-earnings ratio last seen in the mid-1990s: 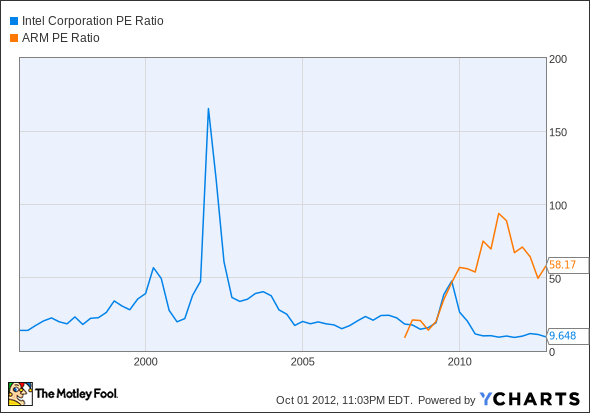 Don't believe in rumors
Last year, rumors surfaced that Apple was choosing ARM-based processors for its laptop and desktops over Intel. Apple already designs its own processors for the iPhone, and it purchased a few semiconductor design companies in the past few years to build them. With Apple's seeming takeover of every aspect of its supply chain, it seems rumors that the company wants to design and create its own processors have some merit. However, Intel's technology and specialization within the semiconductor space have consistently provided performance that outmatches any competitor. One analyst puts Intel three years ahead of the closest competition in regard to product capabilities.

A stable income stock
Intel is a stock that is unlikely to double, but I think it's also a stock with a better future than most believe, and in the meantime it pays an almost 4% dividend. If you want a quality company at a sale price, Intel is definitely one to look into. For a more in-depth look at Intel's prospects, including more on its fight versus ARM, check out our premium report.

If Intel doesn't interest you, take a look at three other relatively easy buy decisions in our free report: "3 Dow Stocks Dividend Investors Need." These three companies embody the term "high quality" while paying a higher dividend than the S&P 500 taken as a whole.