Why Learning to Understand Unfamiliar Accents May Save Your Life 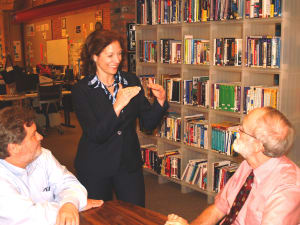 English may be the international language of business, but the dizzying variety of accents despite the common language inevitably lead to communication problems. While the usual solution has been training non-native English speakers to adopt a more familiar speech pattern, a new approach is to equip Americans with skills to better understand non-U.S. accents.

As more U.S. companies have a global presence and more people from all parts of the globe work or do business in America, problems surrounding unfamiliar accents arise that impact the workplace.

"When people ask 'What did you say? Could you repeat that?' over and over again, it could not only be perceived as insensitive, it takes time, impedes productivity and can even be dangerous," says Judy Ravin, president of the Accent Reduction Institute, in Ann Arbor, Mich.

She recounts an incident when a pilot's misunderstanding of landing instructions nearly resulted in the collision of two planes. The pilot attempted landing when a Korean air controller gave directions in English to land on strip "Zulu," using the universal aviation terminology, but pronounced the "Z" as a "J", a common speech pattern for Korean speakers of English, Ravin says. But the pilot thought the speaker meant "Juliette" for landing strip J and began landing at the same time as another plane.

Training to modify the accents of non-U.S. English speakers is not uncommon, but the emerging area of accent-comprehension training for Americans to understand English speakers from around the world is new and growing, Ravin says.

At Fort Hood, she has trained about 75 senior members of the military to better understand Arabic-accented English in preparation for deployment. It certainly seems more feasible to help deployed U.S. military personnel understand English as it's spoken in the countries they're stationed in, rather than expecting whole nations to adopt an accent easily understood by Americans.

Building Our Half of the Bridge

In corporate situations, Anne P. Copeland, executive director of the Interchange Institute, a research and consulting organization in Brookline, Mass., says multinational companies in some countries do a better job than many U.S. businesses in preparing employees to live and work abroad by providing cross-cultural training, English lessons, and accent-reduction training. "They do anything they can to understand us," she said.

Accent-comprehension training allows "smart companies and smart organizations to take responsibility and work proactively to build their half of the bridge."

Karen DeCuir-DiNicola, Manager of Diversity Initiatives for General Motors, says the company first used accent-comprehension training about three years ago. It was effective, she says, "because it puts some responsibility" on native English speakers. It also provided the opportunity to discuss some of the problems surrounding language issues, which is often sensitive, and a plan to deal with it.

The two-to-four hour sessions focus on key sounds and patterns that are common to most language groups and strategies to understand them. The classes tackle syllable stress, rhythm and intonation, and the fact that certain vowels and constants don't exist in some languages. "The "th" and "r" are "difficult for nearly everyone," Ravin says, "and the "s" is often dropped." Participants are also taught to avoid idioms and to not tag a question on the end of a sentence, which is confusing.

The program can be customized to particular professions and language groups, she says, adding that there's a patent pending for the methodology of the company's accent-comprehension program.

Ravin's work began several years ago in response a local group of medical trancriptionists. "They were finding it increasingly difficult to understand the accents of foreign-born doctors," she says, which could result in serious mistakes in describing symptoms, diagnoses and prescriptions.

Ravin says while the program's goal is to eliminate workforce language barriers, respecting people's unique cultural identity and helping to maintain it is essential. "Everyone knows there's a problem, but people don't know there's a solution."
Tags
Read Full Story