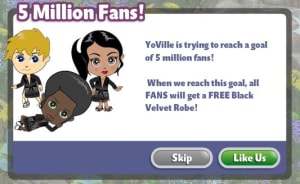 YoVille has started a campaign to grow their fan membership by encouraging players to tell their friends to "like" the YoVille fan page. When YoVille reaches 5 million fans, they will offer all fans a free Black Velvet Robe! Currently, YoVille is at 4.5 million fans, so they are still a little bit from reaching the threshold.

Having 5 million fans is a pretty huge deal. It means that every time the YoVille team releases an update or want to alert their fans about something, 5 MILLION people will get the message. That's one heck of a broadcasting mechanism. It's also a huge accomplishment, because many games do not ever get 5 million players, much less 5 million fans!

So what are you waiting for? If you're not already a fan, head over to the official YoVille page and hit the "like" button so that all players earn a free black robe!
Tags
Read Full Story