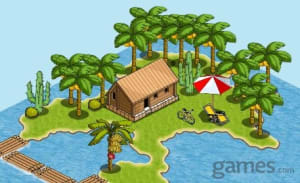 Fish Isle is an interesting take on the whole farming and island theme. It's not a farm game because you aren't actually tending crops. It's not an aquarium game like FishVille where you see your beautiful fish swimming around. It's not a tycoon island game like Tiki Resort. It's actually a "fish farming" game, in which you place fish eggs in nets off the shore of your own island and raise and sell the fish when they're harvestable. When you first log in, you'll find the aesthetics very familiar, since most of the interface, layout, and menus are borrowed heavily from FarmVille.

Fish Isle has released a whole set of new tropical and tiki items. Here is the full list of new items:

In addition to releasing these new items, Fish Isle is currently running a promotion on Fish Cash. Right now you can get 25 Cash for just $1.00. Typically, 25 Fish Cash costs $5.00, so this is a great deal if you were planning on buying Fish Cash anytime soon. This deal is only available once per player, and only for a limited time. The promotion ends on Thursday, April 29th.
Tags
Read Full Story