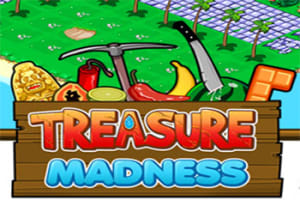 Treasure Madness is better known as the game that Zynga modeled their latest smash hit Treasure Isle after. It has been released for quite some time, and combines treasure hunting with fun simple minigames. Unlike Treasure Isle which unlocks new maps for free as you level up, Treasure Madness requires that you purchase many of the maps.

There is also a new Earth Day collection available. All of these items are only available for the next 6 days, so you had better act soon if you would like to complete these maps while they're still around!