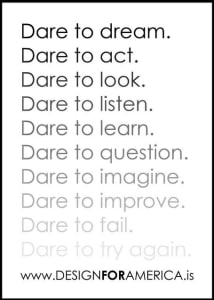 What can happen when students use design to create social impact in their communities? Well, apparently a lot, including the possibility of three students winning $1,000 each.

In October 2008, about a dozen Northwestern University engineering and design students attended a brainstorming session focused on this idea, initiated by the university's Segal Design Institute and McCormick School of Engineering. They, along with a few faculty members (including assistant professor Elizabeth Gerber who coined their name), created Design For America.

"On the other hand, there are no set boundaries," says Iseri. "The main criteria is passion – if students are fired up to do something that forms social good, it's all fair game."

That passion has led to some impressive results, as Hanna Chung, a sophomore at Northwestern studying mechanical engineering and design, explains. "In less than a year, we were able to launch DFA in other universities, and DFA inspired many people because the group is interdisciplinary, and the passion to create social impact and to learn design brings students together regardless of their backgrounds."

The result? There are now more than 250 members at three colleges, including Northwestern, Dartmouth and Cornell. Iseri says Stanford, Harvard and Yale are in the process of joining DFA.

"We are exploring ways to initiate Design For America chapters at colleges that are not in the Top 20 in the US, but are rife with potential," elaborates 19-year-old Yuri Malina, who's studying communication and physics at Northwestern's Weinberg College of Arts and Sciences. "I think that any college campus is an ideal setting for a Design For America, as they are full of keen young minds, and experienced faculty, as well as a wealth of resources which makes for a powerful mix when you are trying to accomplish something good."

They're in the midst of patenting one of their recent designs, and months after forming they won a national award from the DiabetesMine Design Challenge. The online competition "encourages creative tools for improving life with diabetes." It was the first project DFA tackled. They designed an interactive teddy bear for children with diabetes. "The goal of the teddy bear was to get children diagnosed with diabetes to become independent at a younger age," says Malina. They won a $5,000 prize, which they invested back into DFA and will help fund the award for a DFA-created competition that launches on April 14th called The Better Alternative. The idea was born a world away.

"This spring break, Mert and I traveled to Rajasthan, India, one of the most water scarce per capita places on the planet. We went to observe how this water scarcity effects people's water practices, but also to explore the possibilities of starting a Design For India," says Malina. "We witnessed some of the worst conditions I had ever seen in my life, and Mert and I were extremely frustrated by our powerlessness to do something about the terrible conditions these people are living in.

"Out of this frustration came two commitments: 1) We will travel back to Rajasthan sometime in the future to try to set up a sustainable design initiative for people to use the design process to improve their own lives. Call it Design For India, call it whatever you want. 2) Something has to be done about our water practices not just in Chicago, but in the entire 'developed world.'"

So, The Better Alternative challenge was created. "If we want people to preserve this resource, we have to make it so easy and fun – if someone who hasn't used a tap in their life he/she would think of saving it. Essentially, design the better alternative that is more compelling, but uses less water. Let people decide, not out of guilt, but basic instincts," adds Iseri. "Any college student from any background can enter. We are awarding the winning design $3000. Our criteria are Readiness, Creativity and Potential Impact.

Judges include designer Donald Norman, who was named as one of the most influential designers of the world by Business Week; visionary designer Bruce Mau; along with Chris Flink, head of the New York office of IDEO; and Cindy Tripp – the VP of Design from Procter & Gamble. And of course, professor Elizabeth Gerber from Northwestern University, Iseri said.

Creating simple solutions to large problems, Design For America is taking its principles far beyond the classroom.

"Building this organization, I learned what design thinking process is, what human-centered design is, and how to inspire other people by delivering my passion in designing for social good," Chung said. "Most importantly, it helped me to become a better designer who cares about the society and the world, and made me someone who will 'do' instead of waiting for change."

For those who want to enter: Submissions must be made by video, and must run two minutes or less. For rules and entry forms, visit www.thebetteralternative.org.
Tags
Read Full Story